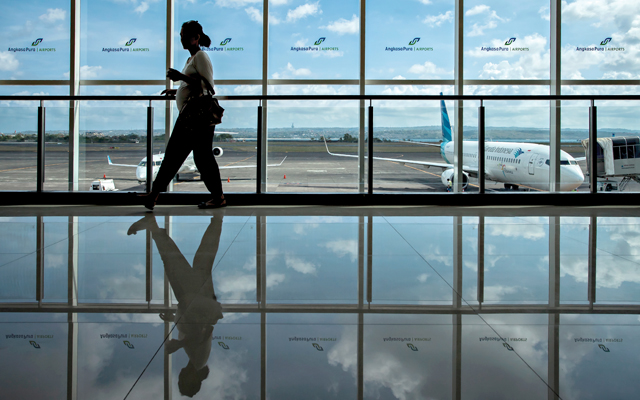 The domestic travel sector has borne the brunt of higher ticket prices, with domestic air traffic plunging 21.3 per cent between January and May 2019 from the same period last year, Statistics Indonesia showed.

Businesses are hit hard as the sky-high domestic airfares cut across travel sectors, with hotels reporting a drop in occupancy, and the home souvenir industry seeing lower revenues as travellers limit their check-in baggage.

Indonesia Hotels & Restaurants Association has already registered a 20-40 per cent drop in hotel occupancy for 1Q2019, which translates into “a decline in rooms and F&B revenue”, chairman Haryadi Sukamdani said.

Indonesian sellers that TTG Asia spoke with at the recent Bali and Beyond Travel Fair in June also had similar grouses.

Martinus Wawanda, general manager of boutique dive resort Cocotinos Manado, said: “The airfare between Manado and Bali used to be around Rp1.6 million (US$114), including 20kg baggage. Today, it is Rp2.4 million, including 15kg baggage.

“With limited direct international flights to Manado, we rely on arrivals from other parts of Indonesia, such as Bali, Jakarta or Makassar. As such, we have lost around 40 per cent of business this year,” she lamented.

“Our European clients are adventurers who travel to remote places like Kalimantan and Sulawesi, so we use many domestic flights to get from one point to another,” said Nawasier Tralala, travel consultant at Classic Tours, which sells tour packages and air tickets separately.

“Out of 12 bookings we have received, eight have cancelled or postponed because they needed to pay extra cost for their domestic flights and baggage fee – many of the secondary and third cities in the country are served by the Lion Air Group,” he said.

While Aneka Kartika Tours & Travel Services Surabaya has yet to experience any cancellations, the company had to fork out the balance for airfares as air tickets are incorporated into its tour packages.

Illustrating the impact, Adjie Wahjono, operation manager, said: “We have a confirmed booking from a 10-member French group for a Java-Sulawesi-Bali trip. Last year, when we calculated the trip for Surabaya (East Java)-Makassar (South Sulawesi) by Citilink, it was around Rp700,000. Now it costs Rp1.2 million.

“Baggage is free on Citilink, but from Palopo (South Sulawesi) to Bali, they can only fly Wings Air (an LCC under Lion Air Group), which now charges a luggage fee of Rp20,000 per kg. Just for the baggage, we need to cover four million rupiah, on top of the balance of the ticket price – and that is only one sector,” he added.

Furthermore, with Garuda recently cutting flights in secondary cities like Maumere and Ende (East Nusa Tenggara) from Denpasar, Adjie said the travel company had no choice but to change the flights to Wings Air, incurring additional baggage fees – previously there was no baggage charge with the Garuda Group.

For Sedona Holidays Medan, whose clients mostly arrive in Medan on direct flights and travel within North Sumatra, managing director Willy Sihombing said that his inbound business into Indonesia was not as badly hit as the domestic sector.

“But for some clients who combine with other destinations in the country, they opt to back-track to Singapore or Kuala Lumpur with non-Indonesian carriers and then onwards to, say, Jakarta, Bali or Yogyakarta, rather than flying direct from Medan, because it is cheaper that way,” Willy said.

Hasiyanna Ashadi, chairman of ASITA (Association of the Indonesian Tours and Travel Agencies) Jakarta Chapter, said: “All this (turmoil) would not have happened if Garuda had not followed the LCCs in dropping rates in the first place. I had warned Garuda’s management five years ago that as a premium carrier, the airline should maintain its premium pricing instead of joining the price wars among the LCCs.”

The Indonesian government has attempted to rein in high airfares through a number of measures, including a proposal to allow foreign airlines to operate domestic routes.

On its part, the Ministry of Transportation (MOT) has reduced the airfare ceiling by 11 to 15 per cent.

Meanwhile, airlines and authorities have since July 11 started introducing discounted fares of up to 50 per cent off the ceiling price for flights departing between 10.00 and 14.00 on Tuesday, Thursday and Saturday. The price excludes taxes and other service charges.

Susiwijono, secretary of the Coordinating Ministry for Economic Affairs, said the discounted fares were made viable with cost-sharing among the airlines, airport authorities and fuel suppliers.

However, the travel trade still deems those efforts insufficient and seeks a better pricing model.

Nunung Rusmiati, chairman, ASITA, said: “Airlines should reopen the subclasses. Even if they only have a limited-time promotion with few seats, it will help clients psychologically. But with a high, single Y class price now, travellers back off.”

It’s unlikely the price ceiling can be lowered further, said Gede Pasek Suardika, MOT’s expert staff on economic, territorial and partnership affairs. Speaking at the recent ASITA National Dialogue, he said: “Reducing the ceiling price by 11 to 15 per cent is the maximum. Otherwise, it will violate the minimum safety standard. Putting cheap prices over safety isn’t an option – the stakes are too high.”

He added that during the meetings to discuss airfares with stakeholders, some airlines revealed that they were facing due dates for leasing payments.

“We must also realise that the Indonesian airlines are performing ‘national duties’ to support remote places in the country. Some airlines have said they were ready to drop the price if they ground their propeller fleet (which means flying to remote areas will cease),” Gede said.

It is, however, unlikely that the travelling public would see airfares return to the level they enjoyed earlier as higher air ticket prices seem to have become the new norm.

Unfortunately, this airfare surge also comes at a time when Indonesia’s fast-growing tourism industry is already facing various headwinds such as the recent string of natural disasters in 2017 and 2018.