A look at the fallouts of unbridled development – and lack of regulation – on Boracay and other once-pristine spots in the Philippines. Will lessons be learnt from Boracay’s demise? 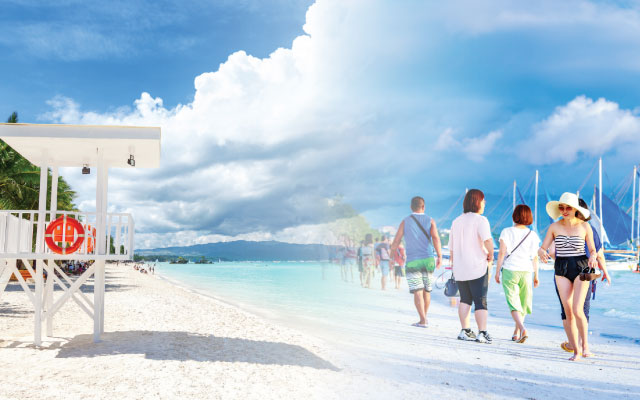 The degradation of one of the Philippines’ most pristine beach destinations into a ‘cesspool’ – a term used by Philippine president Rodrigo Duterte – is a bitter lesson on the need to keep the country’s tourist destinations from falling prey to unbridled growth, lax enforcement and insatiable greed. In February, Duterte threatened to close Boracay, following which the Department of Environment and Natural Resources, Department of Interior and Local Government, and the Department of Tourism found that many establishments on the island were violating rules and regulations, including the 25m easement from the shore, lack of septic tanks, and illegal building on protected lands.

Shocked by the short notice, absence of rehabilitation details and lack of consultation, local stakeholders took a united stand in pleading with the government to reconsider the closure and instead rehabilitate Boracay in phases.

They proposed giving the island’s stakeholders 60 days from April to May to clean up, rectify their mistakes and rehabilitate their respective properties.

Some trade players, however, feel that short-term pain is necessary for long-term gain. Ritchie Tuano, general manager, Asiareps Travel Services, opined: “I (tend to) agree with a total shutdown – maybe not for a year… but on a short-term basis to expedite the cleanup and rebuilding.”

But many believed that the planned closure of Boracay is not the solution. “I don’t believe you can close an entire destination. That would be catastrophic economically,” maintained Bill Barnett, managing director of hotel and hospitality consultancy C9 Hotelworks.

Indeed, according to data from Boracay Foundation, over 17,000 hospitality employees stand to lose their job, plus around 17,000 from the informal sector, such as tattoo artists, vendors and beach masseurs.

The economic repercussions of a closure would be hefty not just for Boracay, which last year drew two million visitors and 59 billion pesos (US$1.1 billion) in tourism receipts, but the country’s image as well.

What then are some alternative ways to bring a semblance of sustainability to Boracay – and other destinations in peril?

Cruz said the country has not learnt from its past mistakes, citing the case of Puerto Galera in Oriental Mindoro, a once-pristine beach destination that has since lost its tourism appeal due to disregard for the environment and management.

Another glaring example is the upmarket West Cove resort in Boracay, a 1,000m2 project that was illegally built on five rock formations. The resort was recently closed for operating without the required permits over the years.

How could the local government and other government agencies have overlooked the flagrant violations of such a large-scale project for so long, asked an incredulous travel agent.

The lack of planning and regulation at tourist destinations in many less developed countries typically boils down to “a broad disconnect between government agencies and (the absence of a coordinated) effort between the national and local levels”, Barnett stated.
“It’s fragmented and the result is absolute chaos as we are seeing in many Asian nations,” he added.

Barnett recommends Asian governments to look at long-term planning, designate certain areas for large-scale tourism and some for lower imprints. Zoning is a key concern, as is issuing and controlling hotel licensees.

“Look at how Hong Kong and Singapore do this. It’s part of public sector planning and goes across tourism lines to land development, infrastructure, taxation and licensing,” said Barnett.

Meanwhile, Paul So, secretary general of the Philippine Travel Agencies Association (PTAA), underscored the need to advocate the importance of tourism sustainability to local government units, as popular destinations like Sagada, Banaue, Baguio and Puerto Princesa are becoming overcrowded due to mass tourism.

“They don’t understand that they have to protect the environment,” lamented So, who was  at press time trying to talk to local government units in the Cordillera.

AA Yaptinchay, general manager of Kirschner Travel Manila and one of the few marine wildlife experts in the Philippines, noted that the country’s coastal and terrestrial destination are “experiencing some level of unsustainability”.

Yaptinchay said: “The Philippines’ best tourism assets are its natural, beautiful islands. But islands are fragile ecosystems with their coral reefs, seagrass, mangrove, beach habitats and biodiversity… Any destination should factor (sustaining these ecosystems) into development. (But) we tend to alter natural beauty for our convenience and comfort and this is where the problem starts.

“Sites and destinations have carrying capacities that need to be determined and followed. Corruption plays an important (factor) in this problem,” Yaptinchay continued.
The importance of sustainability is clear. But the government’s plan to close Boracay for rehabilitation and to ensure sustainability, while also approving the construction of two casinos and a mega hotel – all with Chinese investments – has struck some as doublespeak.

It’s confusing times for tourism in the Philippines. It remains to be seen whether there’s the political will to save Boracay, whether restoring it back to health will require its closure, and whether this concern for sustainability will reverberate to other ailing destinations.