Andamanda Phuket's soft-launch on May 21 signals new beginnings for the destination's Kuthu district and an opportunity for Phuket to bring in valuable tourists, shares Proudputh Liptapanlop, executive director of owner Proud Group 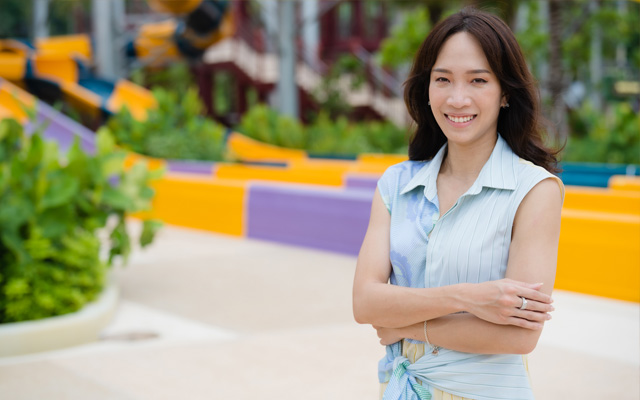 The launch of the Andamanda Phuket mega entertainment project is an exciting addition to the destination. How do you see it contributing to the island’s economy?

Phuket is a unique destination but I think the island is pretty much focused on natural attractions. There haven’t been many man-made attractions or water parks of this kind in Phuket yet, and I think such facilities are an important part of the tourism infrastructure for all countries. Andamanda Phuket will help the island to compete with international destinations.

If you look at other destinations, you will see that they all have great water parks. In Bali there’s Waterbom; in Dubai there’s Aquaventure. You’ll see great examples of how water parks can attract more tourists.

Can the existing infrastructure in Phuket’s Kathu district support Andamanda Phuket? Or would you expect Kathu to develop further as a result of your project?

If terms of transportation, Phuket already has all the right ingredients. The airport recently expanded with a new terminal for international arrivals. There is also a tunnel coming from Patong to Kathu that will help a lot with accessibility.

I think what’s more interesting is perhaps the development of the new district. Kathu has always been a district that is overlooked in Phuket, but now there is our opening as well as Central Phuket 700m away and King Power (duty-free mall). There are plans to open a Tiffany (cabaret show) next to our park.

All in all, I think Kathu has the right ingredients to become the new entertainment centre or the new downtown Phuket.

There has been much criticism from stakeholders about the reopening of Thailand to international tourism, with many believing the government has been too cautious in its efforts. What more do you think could be done?

There is a need to balance… business and public safety. Thailand at the beginning did so well in controlling Covid-19, so much so a lot of us were used to the concept of zero cases. Honestly, that is not going to be sustainable in the long run and business needs to resume.

I think we did very well at the beginning with Phuket Sandbox and we were one of the first countries to open up for tourism. Since then, we’ve been a little slow in opening up the country completely.

As Thailand opens up, operators in Phuket must not overlook the Thai market. The domestic market has been our bread and butter for the past two years. It has been holding up the travel industry. In the first year (of reopening), the domestic market will remain a priority, contributing about 70 per cent of our visitors.

As for other markets, we are seeing increasing returns. India is fast-growing, and Australia is a very big market. In April alone, there were 10,000 Australian arrivals. If you look at the figures for 1Q2022, year-on-year growth is about 200 per cent.

I believe recovery will be rapid, but it will take another year for us to return to 2019 levels.

What should the private or public sectors do to get Thailand tourism back on track and achieve pre-pandemic levels of arrivals?

Tourism Authority of Thailand has plans but what’s more important is that we used the past two years to pivot to a more sustainable tourism approach, instead of focusing on numbers.

We are talking about 40 million visitors coming to Thailand, but let’s focus more on the value each tourist brings and what they will spend in the country.

Phuket and Phi Phi island have never been more beautiful over the last two years. Underwater life is coming back. So, how do we keep that going while generating enough value? I think it’s going to be important to find that balance.