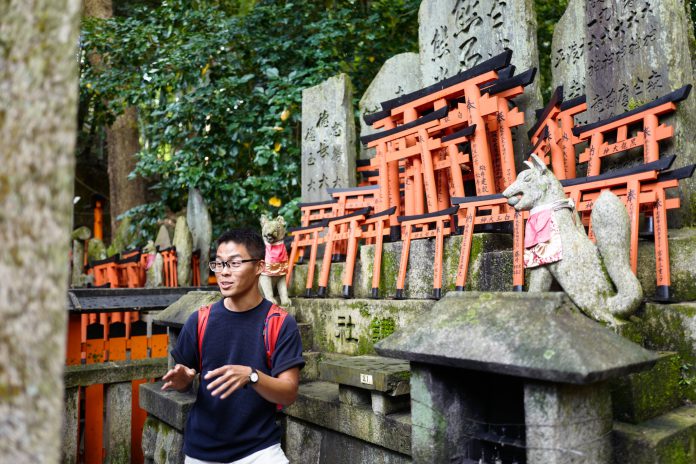 Like most tour guides who made the leap into the virtual experience market to tide through the Covid-19 slump, Lee Xian Jie also ventured down the same route – what’s interesting is that his virtual pivot happened because of a dog.

The 30-year-old Singaporean, who runs Kyoto-based tour agency Craft Tabby with his business partner, Yasuhiro Shiwaku, made the decision to pause the company’s in-person tours last February, at the peak of the Covid-19 outbreak in China.

Towards the end of June, it became clearer to them that Covid-19 would drag on. When approached by Airbnb to craft a product for its Online Experiences platform, Lee was initially resistant to the idea as he thought the whole point of travel was to experience things first-hand.

“But I had been taking the downtime to pursue my interest in plant identification, and was walking my dog Mori endlessly. One day, I was taking her on a walk through the Kyoto Gyoen National Garden where the Imperial Palace is, and called my family in Singapore to show them how Mori was sniffing and chewing at wildflowers,” he recounted.

“Mori was born wild in the forest so she was especially interested in flowers that happened to have medicinal properties, and ignored all the toxic flowers.”

It was then that the idea of a virtual tour with Mori hit him, and Flower Hunting in Kyoto with Mori the Doggo was born. Since its launch last April, Lee has taken hundreds of virtual travellers on a live tour of the Palace grounds, identifying wild flowers and plants that Mori stopped by, with the help of a botanist friend.

Response for the online experience has been “overwhelming” from the get-go, according to Lee. “People were booking it for loved ones who love plants, but had mobility issues and would never be able to fly to Japan, and I was surprised by how older guests were the most enthusiastic,” he shared. “Over half of the people on the first tour were over 60, and almost everyone was using Zoom for the first time.”

Today, Craft Tabby has expanded its online experience menu to include Forest Bathe in Kyoto’s Sacred Mountain, an adaptation of its popular Alternative Fushimi Inari Walking Tour; and Zoom Around Kyoto the City of Water, exploring how Kyoto’s underground water sources shaped the city’s food, culture and spirituality. Elsewhere, Fly Like A Dragon in the Dragon Village involves flying a drone through scenic spots in the Ryujinmura Village in Wakayama Prefecture.

Starting off with about 50 bookings in April, that number swelled to 500 in November, with the rollout of new products along the way. Last month, the company secured about 1,000 bookings, partially made up of corporate clients.

Lee explained: “Online experiences are very different from in-person tours. They are never just about a place, but about seeing things that cannot be seen in real life. For example, I go under waterfalls at Mt Inari to demonstrate the traditional waterfall meditation and ritual for Forest Bathe in Kyoto’s Sacred Mountain.

“That’s something I wouldn’t be able to do on the actual tour because there are spiritual spaces, not somewhere you can take others for touristic purposes.”

In Zoom Around Kyoto the City of Water, Turkish-born guide Gulay takes guests to eight different places scattered across the city in one hour, tying the story together with the theme of water. Lee said: “Most people would not physically be able to visit all eight places in one day in real life, let alone one hour.”

The virtual pivot has made Craft Tabby less of a tour guiding company, and more of an agency that creates interactive documentary experiences, described Lee.

“It has opened us to new markets, like psychologist networking groups who want to experience forest bathing in the land where forest bathing was born, and teams from companies like Amazon, Facebook, Google, and IBM wanting to see how we are using Zoom in a totally new way,” he said, adding that his past experience as a documentary producer for Al Jazeera English came in handy when crafting online experiences.

As well, Craft Tabby has collaborated with Singapore tour agency Lion Heartlanders to bring online experiences in Japan to hundreds of schoolchildren in Singapore. “We are now working on a new live tour where schoolchildren can control the narrative and see things happening in Japan in real time,” Lee said.

The bulk of Craft Tabby’s bookings for online experiences comes via the Airbnb’s Experiences platform. While its offerings have been listed on TripAdvisor, Sistic and other booking sites, more than 90 per cent of bookings have come through Airbnb, shared Lee. “We expect this percentage to fall as more group bookings come through experience providers like Lion Heartlanders,” he added.

These days, Lee has also been kept busy restoring a farmhouse in Ryujinmura Village. In future, he plans to run nature tours and a farm-to-table organic café there – a retirement plan he said was brought forward by Covid-19. Revenue earned from his Fly Like A Dragon in the Dragon Village experience, which was shot in that village, is pumped into the restoration project.

Looking ahead, Lee said the agency plans to hire and train local guides to give in-depth nature tours and workshops in Ryujinmura. Post-pandemic, he will also resume work on creating an English-language app to guide visitors to hidden gems in Kyoto where they can learn about specific aspects of the city’s culture.