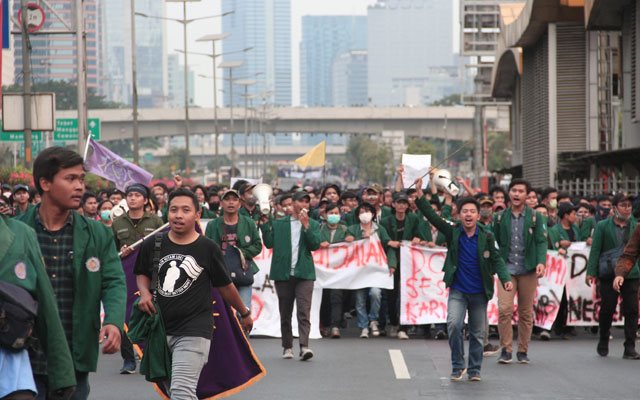 It’s been a week of apprehension for many inbound tourism players in Indonesia after demonstrations broke out in Jakarta to demand lawmakers to halt the passage of controversial bills.

Australia issued an official travel advice in response to the recent gathering of hundreds of thousands of Indonesian students to protest against changes to controversial bills including one that would criminalise extramarital sex – something seen by travel trade players as a potential threat to Indonesia’s tourism industry.

On its official Smartraveller page, the Australian government wrote: “We’ve updated our travel advice to include new information about possible future changes to Indonesia’s criminal code… We haven’t changed the level of our advice – ‘exercise a high degree of caution’ in Indonesia, including Bali.”

The Australian government has advised its citizens to monitor the local media for information about possible new safety or security threats, to check with hotels, tour guides or employers about local safety and security concerns, and to avoid known flashpoints, such as protest areas.

Like Australia, the US has strongly advised its citizens to avoid protest areas where demonstrations are occurring and to exercise caution if unexpectedly in the vicinity of large gatherings or protests.

The US Embassy & Consulates in Indonesia’s official website also contains a warning to travellers to be aware of their surroundings and to keep a low profile.

In Jakarta, the rally resulted in clashes between the police and the protesters but the protest area was contained to the House of Representatives compound in Senayan, with the majority of the capital unaffected, without public facilities suffering major damages.

But the university student rally, which kicked off on Tuesday, caused anxiety among inbound travel agents. Anita Utami, sales manager of Dwi Tour Jakarta Branch, said that on that day, her travel agent partner in Japan called her continuously, bombarding her with questions about safety issues in Jakarta as her Japanese guests were scheduled to transit in Jakarta and stay in a hotel near the Soekarno-Hatta International Airport.

“I told them, ‘Don’t worry. It is safe as the protest area is very far from the airport’,” she said.

According to Dwi, 75 per cent of her inbound clients visit Indonesia for business and 25 per cent for leisure. None of them made cancellations due to the rally, she said. But she expressed concern that although the rally only took place in a small part of the city, it could potentially deter travel to the country due to misunderstandings caused by heightened media coverage over the student protests.

Hasiyanna Ashadi, managing director of Marintur Indonesia and chairman of the Association of Indonesian Tours and Travel Agencies (ASITA) Jakarta chapter, expects Tourism Ministry’s Tourism Crisis Center (TCC) to take action during the staging of rallies in Indonesia. According to her observation, the centre only operates in certain conditions, such as natural disasters and terror attacks.

She said that the TCC could assist inbound tourists and people from outside Indonesia in obtaining useful information about demonstrations, including the location of protests, so that they would not be misinformed that the political unrest is happening across the entire capital city.

“Jakarta is a big city. I don’t want the city’s tourism to collapse entirely because people think that rallies are (happening) everywhere,” said Hasiyanna.

With leisure travellers making up 80 per cent of total inbound arrivals to the country, Marintur’s guests stayed calmed this week, according to Hasiyanna. She, however, hopes that the Criminal Code rally will not persist like the anti-former Jakarta governor Basuki “Ahok” Tjahaja Purnama rallies two years ago.

Hasiyanna, whose clients are mostly from Europe, recalled that the Ahok rally made people scared to visit Jakarta because it happened several times, noting that it caused the number of her inbound visitors to decline by 10 per cent at that time.

Jongki Adiyasa, executive director of Ina Leisure Tour & Travel, said that Jakarta and Bandung were the most favourite destinations for his guests who were mostly families from the Middle East. The rally in Jakarta, however, did not cause them to postpone or cancel their trips.

“The tourism industry is facing difficult times right now, not only in Indonesia but also in other countries. Even our big brother like Thomas Cook collapsed. I hope (protestors) think twice before they take to the streets. If this rally continues, it will make potential inbound tourists reluctant to visit,” he said.

Pirantie Basa, director of sales of Harris Vertu & Yello Hotels Harmoni, said that the demonstrations did not affect her business as it happened far from her hotel.

She expects the rally to end soon. If it continues, she hopes that the protesters do not move to the areas around the State Palace, which is closer to her hotel.

“When post-presidential election protests escalated in the middle of this year, we lost residential meetings worth hundreds of million rupiah in one day just because of a rally in front of the Constitutional Court (MK) and General Election Commission (KPU). Streets leading to our hotel were blocked, and many made cancellations at that time,” she said.

Pirantie, therefore, welcomes President Joko Widodo’s plan to move Indonesia’s centre of administration to East Kalimantan and retain Jakarta as the financial capital. If it becomes a reality, business people in Jakarta will no longer be affected negatively by political rallies directed at the government or lawmakers, he said.