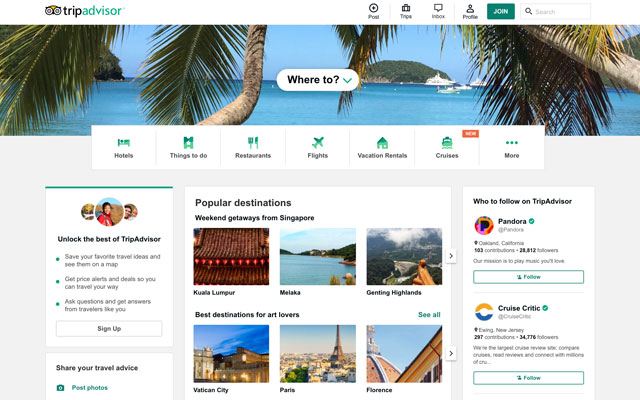 Over one million fake reviews were stopped from being displayed on TripAdvisor, out of the 66 million reviews submitted to the travel platform in 2018, revealed TripAdvisor in its first-ever Review Transparency Report.

The report, which analysed a full year’s worth of data on reviews submitted by the global travel community, made public details about its review moderation processes and the extent of fake review attempts targeted at the platform in 2018.

It also details the multi-pronged approach TripAdvisor takes to ensure reviews posted on its pages comply with the site’s guidelines. The report also provides a detailed breakdown of the proportion of reviews that were either blocked or removed.

Becky Foley, senior director of trust & safety at TripAdvisor, said: “Ensuring that TripAdvisor is a trusted platform for our users and listed businesses is a top priority. We’ve continued to make advancements to our industry-leading fraud detection efforts in recent years, but it’s a daily battle and we are far from complacent.

“While we are winning the fight against fake reviews on TripAdvisor, we can only protect our corner of the Internet. As long as other review platforms aren’t taking aggressive action, then fraudsters will continue to exploit and extort small businesses for cash. It is time other platforms like Google and Facebook stepped up to the plate to join us in tackling this problem head-on.”

Here are the key report findings:

66 million reviews were submitted to TripAdvisor in 2018 by the global travel community. Everyone was analysed using advanced fraud detection technology, and 2.7 million were subject to additional human assessment by content moderators.

4.7 per cent of all review submissions were rejected or removed by either TripAdvisor’s analysis technology or manually by the content moderation team. There are a number of reasons why TripAdvisor rejects or removes reviews, ranging from guideline violations to instances of review fraud.

2.1 per cent of all review submissions were determined to be fraudulent, but the vast majority (73 per cent) were blocked before they were ever posted. This equated to over one million fake reviews that were prevented from being displayed on TripAdvisor.

Fewer than one per cent of reviews were flagged by users or businesses for potentially violating TripAdvisor guidelines. TripAdvisor’s content moderation team reviewed most of these community reports within six hours of them being submitted.

Some 34,643 businesses were subject to a ranking penalty, which is a reduction of a property’s position within the popularity or traveller ranking. Ranking penalties are applied when a business is caught attempting to post fake reviews.

The report also described TripAdvisor’s efforts to catch paid reviewers. Paid reviewers are individuals or companies that try to sell “user” reviews to businesses listed on the site. Since 2015, TripAdvisor has stopped the activity of more than 75 websites that were caught trying to sell reviews, including one individual who was sentenced to nine months in prison by the Criminal Court of Lecce in Italy last year.

In addition to the release of moderation data for the first time, the 2019 Review Transparency Report highlighted a number of commitments TripAdvisor is making to protect the integrity of reviews on its platform, including continuing to improve systems to identify fraud and penalise the perpetrators, further investing in training for human moderation teams, pursuing partnerships with law enforcement authorities to support their efforts to tackle fake online reviews and building on transparency efforts by sharing more insights into TripAdvisor moderation processes and fraud investigations on the TripAdvisor Insights blog.

The full report can be read here.