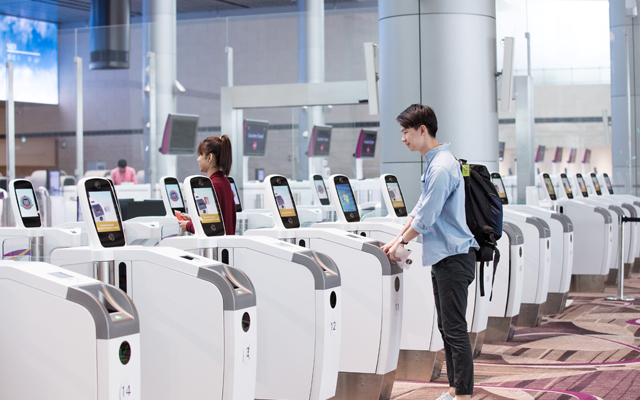 Changi Airport yesterday unveiled its soon-to-open Terminal 4 (T4) during a special media preview, highlighting how the extensive use of technology and automation will take centre stage at this new facility. This fully automated process is expected to yield some 20 per cent manpower savings in the long term. The terminal also holds three rows of conventional check-in counters for airlines not yet equipped for automated check-in. It will have centralised areas for departure and arrival immigration as well as pre-board security screening.

Nine airlines are set to operate in T4: four under the AirAsia Group, as well as Cathay Pacific, Cebu Pacific, Korean Air, Spring Airlines and Vietnam Airlines. These serve an estimated eight million passengers in Changi Airport each year.

Two lounges – Cathay Pacific’s First and Business Class Lounge and Blossom Lounge, a pay-per-use lounge managed by SATS and Plaza Premium, are located at level 2M within the transit area.

Located two kilometres from the existing three terminals, T4 will be connected to Terminal 2 by shuttle buses that operate at 10-minutes intervals round the clock.

Currently in the final stage of operational readiness trials, T4 is expected to begin operations later this year. It will be open to public visits from August 7-20, for which all 200,000 tickets have been snapped up.