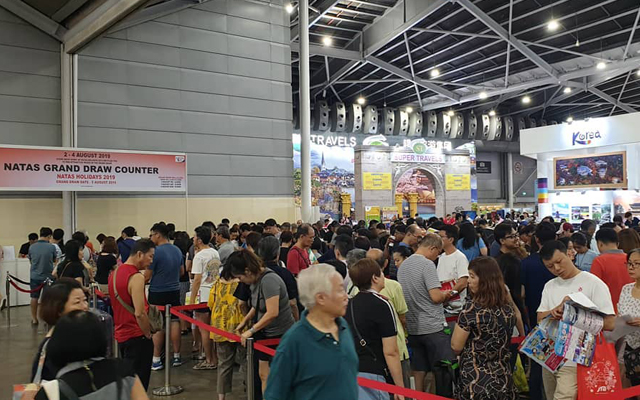 The National Association of Travel Agents Singapore (NATAS) is bringing back its signature NATAS Holidays 2022 over August 12 to 14 at Singapore Expo Hall 5.

The show, branded as the only premier travel fair in Singapore, will feature more than 40 exhibitors from the travel and tourism ecosystem, including NTOs, travel agencies, hotel companies and cruise specialists.

While NATAS was not available for comment at press time, exhibitors Chan Brothers Travel and Korea Tourism Organisation told TTG Asia that the return of the travel fair was timely, as Singapore residents are eager to catch up on lost holidays.

“We are thrilled that leisure travel is roaring back with bookings and enquiries rising exponentially,” said Jeremiah Wong, spokesperson for Chan Brothers Travel, which will take up a 252m2 booth at NATAS Holidays 2022.

He added: “2022 is the chapter of our industry’s resurgence and we are positive that 2023 will be the year that tourism records a strong bounce back to pre-pandemic levels as the market stabilises.”

Jamie Chua, marketing manager with Korea Tourism Organization (Singapore Office), said the event would be instrumental in restoring consumers’ confidence in travel, “by demonstrating that the travel industry is ready to rise above the pandemic”.

“We wish to bring back the joy of travel to everyone in Singapore,” Chua added.

To inspire travel and encourage bookings, Korea Tourism Organization (Singapore Office) has planned a series of workshops at its booth and various communications centred on special interest holidays. It will also give away tickets to a special showcase at Victoria Theatre in September for purchases made at the travel fair.

“We would like to encourage our visitors to go deeper into South Korea where they can experience and explore different parts of (of the country) through K-cycling, K-trekking and K-food,” revealed Chua.

The tourism office will, in particular, highlight the region of Jeollanamdo, home to UNWTO 2021 Best Tourism Village and recognised as Land of K-Gourmet. It has partnered with Singapore lifestyle and entertainment magazine, U-Weekly, on a campaign titled UTRAVEL to Korea to showcase the region and offer an October tour that will be led by a mystery personality.

Access to South Korea has vastly improved on the back on several new air links from Singapore, she noted. Air Premia, Jeju Air, Scoot and T-way are among the airlines that have recently launched new services from Singapore, and Chua said more would follow in the coming months.

Chan Brothers Travel is also determined to convert travel intentions into action on the show grounds, and will present its widest selection of dates and confirmed departures, as well as numerous offers and new itinerary launches, including its popular celebrity-led tour series.

Wong hopes “astute travellers” will book and secure their seats at the August show, so as to beat the potential price hikes in the marketplace. He noted that the price of travel continues to be volatile and sensitive to surging airfares due to limited seat inventory.

Chan Brothers Travel expects strong bookings for the second half of the year until March or April 2023, with year-end and spring travel drawing particularly high demand from Singapore residents.