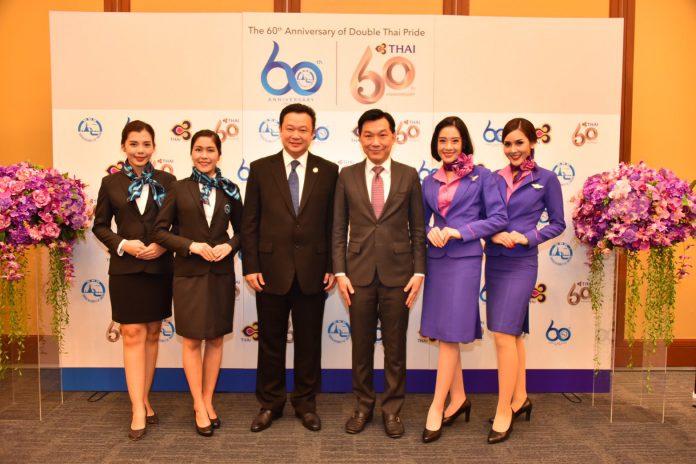 The Tourism Authority of Thailand (TAT) has partnered Thai Airways International (THAI) to push out campaigns aimed at promoting tourism to the country, as part of both organisations’ 60th anniversary celebrations in 2020.

Yuthasak said that TAT is very pleased to cooperate with THAI as they both share the same goal to boost inbound tourist arrivals and encourage Thai people to travel locally to generate national income.

Promotional campaigns will be targeted at diverse age groups, namely, silver tourists, millennials, and Gen X to boost inbound travel to Thailand, which will generate more national revenue throughout next year.

TAT will also support marketing activities by providing in-depth information on tourism activities conducted, especially those that attract foreign tourists, so that THAI can include them as part of their tourism packages to sell to tourists.

Some of these activities include the Amazing Thailand Marathon Bangkok (February 2, 2020), the annual World Wai Kru Muay Thai (March 17), the Great Mekong Bike Ride, and international sports events such as women’s professional golf tournament LPGA and the MotoGP.

THAI will also join in TAT’s efforts to promote responsible tourism, such as the tourism authority’s Thailand Reduce Waste campaign which aims to reduce the generation of trash and single-use plastic by travellers.

Yuthasak added that TAT’s marketing goals for 2020 include keeping Thailand in the world’s top six countries with highest tourism revenue by generating a 10 per cent increase in revenue or approximately 3.7 trillion baht (US$122 billion), and increasing sustainability in tourism.

Joint projects of TAT and THAI in 2020 include the THAI Pass Plus campaign which lets passengers use their THAI or THAI Smile boarding pass to obtain discounts or souvenirs at stores participating in TAT’s Amazing Thailand Grand Sale nationwide. TAT will also collaborate with THAI overseas offices to offer privileges and special price air tickets for passengers visiting Thailand.

THAI will also roll out the 60th Still Flying special campaign on its 60th anniversary for senior tourists who are still eager to travel. Other packages and activities will also be launched on this occasion.