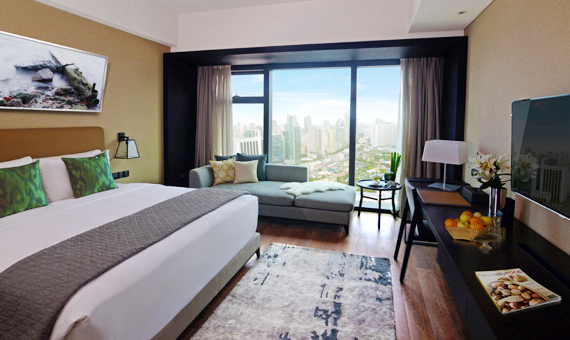 THE newly minted I’m Hotel in Makati is hoping to lure corporate groups with its onsen spa and other novel water treatment concepts when it soft-opens in November.

I’m Hotel, a brand so named to project guests’ personalities and preferences for an experiential stay, is owned by a Singaporean group and is a sister property to Hotel H2O in Manila. It will first open with 100 rooms, an onsen spa, an infinity pool, MICE facilities and most other facilities. The remaining 334 rooms will open in 1Q2017.

“Based on our studies, the latter four markets will be particularly interested in our onsen spa concept,” she told TTGmice e-Weekly.

I’m Onsen Spa covers 3,800m2 of space over six storeys, with state-of-the-art facilities including carbonated bath technology from Japan; 69 beds; executive and VIP rooms for small exclusive gatherings; relaxation lounges. Premium rooms have a bathtub atelier who will draw a bath with customised scents and light bites and beverages.

I’m Hotel elevates swimming into a sensorial experience with an acrylic-bottomed, see-through infinity pool that can be seen upon entering the lobby.

Lim said the hotel has several venues for events. The 80m2 Palmera room can take 40 pax in a classroom setting, while Narra Ballroom can seat 400 people for a banquet.