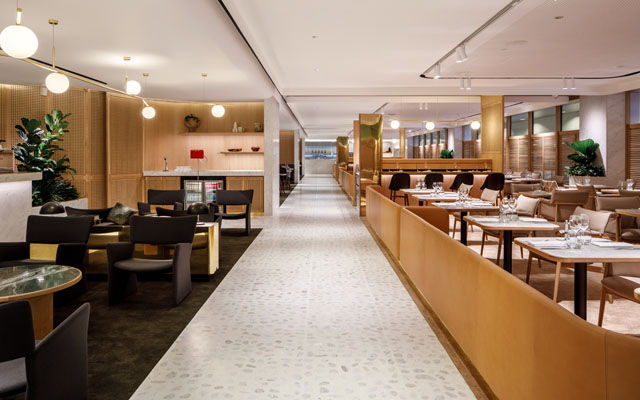 Qantas Airways has reintroduced on June 20 its First Class offering to customers travelling to and from Singapore with the return of its superjumbo A380 aircraft and the reopening of its First Lounge at Changi Airport.

The First Class offering is available on flights between Australia and Singapore, and Singapore and London. There are 14 First Suites and an on-board lounge in a supper club style with seating for 10 people and a snack menu.

Qantas has also re-opened its First Lounge at Changi Airport, which was launched in December 2019 and became one of the most popular lounges on the Qantas international network. It operated for only three months before closing due to the pandemic.

The 1,000m² First Lounge has capacity for 240 guests and offers a fine dining experience with a menu inspired by Singapore’s vibrant dining scene. Featured dishes include signature laksa with crayfish and rice noodles, barramundi with sambal browned butter, and shrimp-paste chicken wings.

The Carrara marble bar has an extensive beverage menu offering champagne, barista coffee and cocktails like the Merlion Blush.

The lounge features zones for dining, working and relaxing as well as 10 shower suites.

The First Lounge operates alongside the existing Qantas Business Lounge.

Stephanie Tully, chief customer officer, Qantas Group, said: “We’d only just opened our brand-new First Lounge before the pandemic forced its closure. Many of our Frequent Flyers never had the chance to see it.

“We’re delighted to once again welcome our customers back to this beautiful lounge at Changi Airport. Our lounge team is excited to be back and eager to offer the warmest hospitality to Qantas and our partner airline customers.”

She added: “Singapore plays an important role in Qantas’s worldwide network as we continue to ramp up capacity in line with strong travel demand. It’s great to have our First offering back both in the air and on the ground at Changi Airport, which is consistently recognised as one of the best airports in the world.”