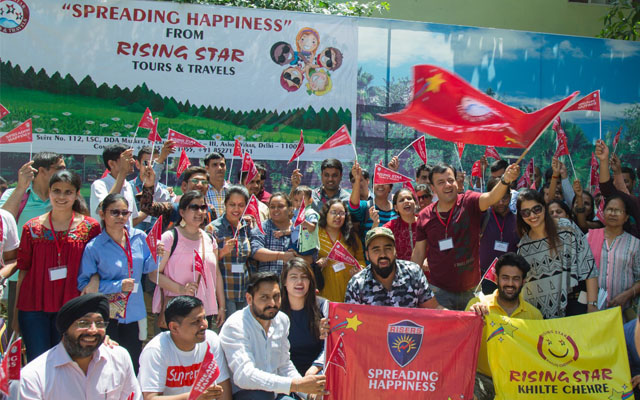 In July 2019, Amit Jain, founder of Rising Star Tours and Travels (RSTT), had met a few visually-challenged individuals and learnt that their most unfulfilled desire is to travel.

Being part of the tourism industry, he took it on himself to create a platform that helps visually-challenged people to travel. He wanted to give this community an experience that they would never have dreamt of.

Jain shared that travel for visually-challenged persons usually involves a day trip where they were taken someplace and brought home by the evening. If it was an overnight stay, the quality of the accommodation was compromised and there were limited volunteers on the trip to ensure the comfort of the travellers.

He said: “So, I ensured that on all of our trips, the stay is in a good four-star or five-star hotel. For every three visually-challenged participants in the trip, we have one assigned volunteer who looks after their needs.”

The first trip that Jain organised was a trip to a small picturesque hamlet called Pangot located in the state of Uttarakhand. Following that, RSTT has organised 10 similar trips to domestic, as well as international destinations like Jaipur, Goa, Jim Corbett, Thailand and Dubai, where the group size for each trip ranges from 50 to 70 people.

RSTT is now preparing for its 12th trip to Shimla on May 12.

Response has been overwhelming and they are unable to accommodate all who are interested to join their trips, Jain added. Unlike at the beginning, where many were sceptical and he had to convince people that such tours were possible for the visually-challenged community.

His efforts paid off as over time, RSTT received very positive feedback from those who had travelled on their trips.

A recce of the destination is done before planning the trip, and the RSTT team discusses with hotels and other stakeholders involved, like transport providers, to sensitise them about the needs of visually-challenged individuals. Even the volunteers are educated on how to deal with the group.

“Frankly, visually-challenged tourists are the same as a ‘normal’ tourist. They like to dance, sing, listen to music or take a dip in the pool. They experience the same rush, when say someone with sight would feel while on a jungle safari,” explained Jain.

Presently, the finances of these trips are managed in a three-way arrangement: RSTT contributes the first part, the second part by sponsors, and the third part is managed by the visually-challenged participants themselves.

Jain said: “A very nominal contribution is taken from the traveller to maintain their dignity and keep their commitment level high; in the past, what had happened was that many individuals didn’t turn up even after confirmation.”

He shared his future plans of organising more of such trips but with financial constraints, many requests will be turned down. He also hopes to organise similar trips for people with other disabilities.

He also spoke of creating a mobile application where people who want to volunteer on such trips can submit their details and be involved.

Jain explained: “For example, if a visually-challenged person is travelling to Mumbai on his own and wants the service of a volunteer who can help him to explore a certain part of the city, an interested person can offer his or her service. However, there will be no money involved in such an arrangement.”