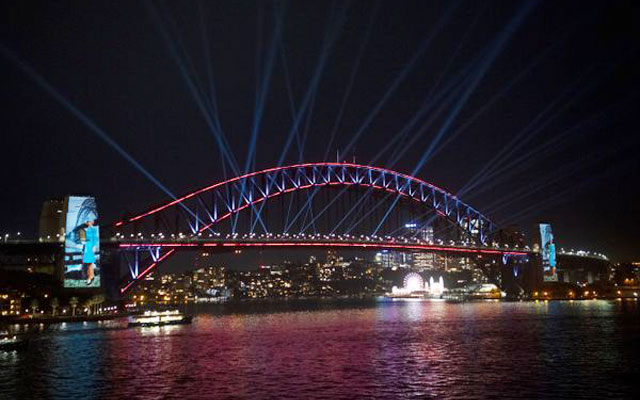 More than 1,300 LED tubes, 126 LED fixtures and 38 searchlights were used in the city’s birthday bash for the airline, which started off as Queensland and Northern Territory Aerial Services on November 16, 1920. The projection of 60 historic images and two, 65-metre-high birthday candles onto the southern and northern pylons completed the transformation.

A low flying Qantas 787 ‘blew out’ the candles as it went over the Sydney Harbour Bridge.

New South Wales minister for jobs, investment, tourism and Western Sydney, Stuart Ayres, said: “Sydney has benefited immensely from 100 successful years of business for Qantas – from bringing visitors to the state and boosting our visitor economy to providing local jobs.

“What better way to mark such an important milestone for Qantas than with a celebration in the city it has chosen as its headquarters for the last 82 years involving another much-loved Sydney icon, the Harbour Bridge.”

Almost 200 passengers, including 100 Qantas staff, were on board the 100-minute flight which was a special Centenary Scenic Flight to mark the airline’s 100th year.

The candle-blowing moment was a surprise for those on the ground and on board the flight.

The activation, executed by Destination NSW, complements a new campaign of activity designed to support the recovery of Sydney hospitality and tourism businesses.

Destination NSW CEO, Steve Cox said the Qantas Centenary provided an opportunity to send out a message of hope, both to Sydney businesses and to residents of Sydney and New South Wales.

“This stunt was just the beginning of what will be a truly amazing line-up of events coming up across the city, and we are looking forward to welcoming visitors from across Australia to Sydney this summer,” said Cox.