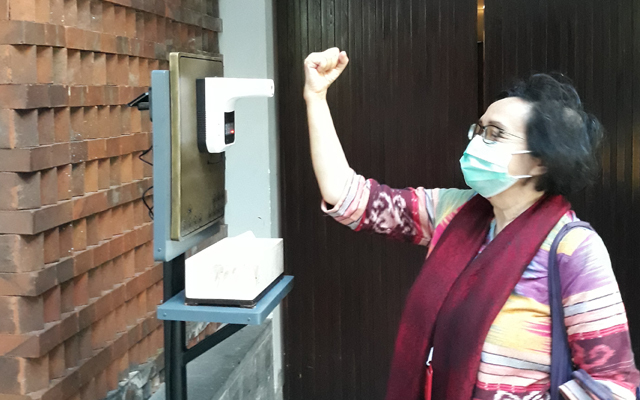 I was both excited and nervous when I received an invitation from the Indonesia National Carrier Association (INACA) and Indonesia Hotel and Restaurant Association (IHRA), along with airline partner Indonesia AirAsia, to join them on a trip in late-August from Jakarta to Bali.

It was a trade activity, and one that was being held after a six-month-long travel freeze. It presented an opportunity for me to experience the heightened health and safety protocols that we have written about and read about a lot lately.

As part of the new travel protocol, all passengers must fill in an e-Health Alert Card and take a rapid test for Covid-19. While the effectiveness of this test is widely debated among industry members, I felt a sense of relief to see a non-reactive result.

I have never seen both Jakarta and Bali airports – two major gateways to Indonesia – this quiet, but an airport staff in Jakarta told me he was glad to see the airport “pulsing” again.

Traffic has picked up since the government eased restrictions in June, especially during the two long weekends in August. Jakarta’s Soekarno–Hatta International Airport recorded 1.1 million passenger movements, while Bali’s Ngurah Rai International Airport handled 174,462 movements last month, according to the airport authorities. While this pales in comparison to Jakarta airport’s average 4.5 million and Bali’s two million per month last year, traffic has been on the rise in the last couple of months.

The authorities of both airports have done their part in keeping to new health and safety protocols, such as marking seats and floors to ensure safe distancing, putting staff in protective gear, and providing hand sanitisers in various places.

More work needs to be done to discipline travellers in the new normal procedures. I saw airport staff having to correct the way passengers wear their masks; some even forgot to wear one. They also had to constantly remind journalists – myself included – to maintain a safe distance when taking ceremony pictures.

Travellers in the new normal will need to provision even more time for detailed security checks which will now include health document clearance and temperature checks. I went through several rounds of manual temperature checks between my arrival at the airport and boarding. It would be great if this process could be digitalised to speed things up and minimise potential snaking queues once travel picks up.

On my AirAsia flight, only 70 per cent of seats were used as the middle seats were kept empty. The inflight crew had face masks, face shields and hand gloves on, and food service was limited to pre-ordered meals.

Both cabin crew and the captain reminded passengers of the airline’s health and safety protocol and provided us with a peace of mind by explaining the capability of the aircraft’s HEPA air purification system – it cleans 99.9 per cent of air particles every two minutes.

Upon arrival, disembarkation was done in sequence – three rows at a time, starting from the front.

Bali has prepared itself and has been active in getting the island ready for both domestic and international tourists, including certifying all business establishments according to new rules and regulations.

The trade event brought me through three hotels – Novotel Bali Ngurah Rai Airport, The Anvaya Beach Resort Bali and The Royal Santrian Luxury Beach Villas. These properties demonstrated how new health and safety protocols could co-exist with the relaxing and charming ambience of a resort destination.

Take F&B service for example: snacks and fruit platters were individually served on covered plates, while buffet breakfast and lunch were served by restaurant staff. Meeting room capacity were halved for safe distancing.

Like many resorts on the island, The Anvaya and The Royal Santrian have the advantage of open-air spaces outside their restaurants. This allowed guests to enjoy the fresh breeze, sound of crashing waves and frangipani scent as they nursed their drinks – while keeping their masks on in between sips.

The new health and safety requirements need some getting used to. Throughout various ceremonies, I observed varying diligence in sanitisation procedures. For example, at a ceremony hosted by AirAsia, speakers were offered hand sanitiser after their speech, during which they held microphones in their hands. At other ceremonies, no covers for microphone mouthpieces were provided; while at one ceremony, a single microphone was shared by several speakers without cleaning in between.

We also need to be mindful of our excessive use of plastic as we try to insulate ourselves against contamination. Plastic cups, cutleries, wraps and covers are used more than pre-pandemic times.

Overall, it was wonderful to be able to travel again. Being able to visit Bali for my first post-lockdown trip was a treat, but it is heartbreaking to see the once-popular island so quiet and with so many shops and restaurants closed.

My biggest hope is that the Safe Travel Campaign succeeds in boosting travellers’ confidence and that Bali hospitality stakeholders will approach markets more aggressively to stimulate travel revival.