Elected into the presidency of the Federation of ASEAN Travel Associations when the future of travel and tourism was bright, Tan soon finds himself tackling the world’s biggest travel freeze and one that has brought his industry to its knees. 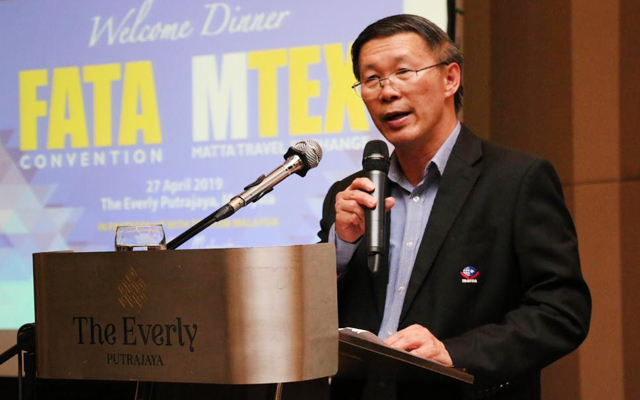 At the ASEAN Tourism Forum in January this year, FATA (Federation of ASEAN Travel Associations) members were making plans for ITB Berlin in March. This is one of the most important travel tradeshows in Europe, as it provides a big opportunity for members to further develop the European travel market in their respective countries.

As I was packing my bags and getting ready for the long flight to Berlin, I received a message from the organiser that the show had been abruptly cancelled due to the rapid spread of the coronavirus. In the weeks ahead, countries around the world started locking down their borders.

I have been involved in the travel industry since 1990 and I have experienced many crises that affected travel demand, such as the Gulf War, the global financial crisis, SARS, global recession and natural disasters. But none of those were of this magnitude and had such dire impact on the travel sector where the entire chain – aviation, hotels, cruises, theme parks and travel agencies – has been impacted all over the world.

The sector will take at least a year to recover, and boosting travel confidence is among the greatest challenges FATA faces this year.

Do you see this crisis as a real test of the value of FATA as a professional association?
Yes, I do. FATA is the umbrella body for national travel associations in South-east Asia. The combined number of travel agents under FATA is over 7,700.

As an association, this crisis has made us harmonise our strategies in dealing with challenges and working in solidarity with our members. Let me give you an example. There were a lot of airline cancellations during the pandemic. The airlines, in general, issued travel vouchers instead of cash refunds. Customers who purchased airline seats from (travel agents) were unhappy because they wanted their money back, rather than a voucher which has little or no value should (the airline) be liquidated.

Thus, we approached the International Air Transport Association in April to compel the airlines to process refunds in compliance with the rule of law. There has been no positive response but we will continue to pursue the matter.

While we remain sympathetic to the multiple challenges faced by airlines during this crisis, the position taken by airlines could stifle forward bookings and consumer confidence, (affect) travel patterns, and spur unnecessary lawsuits.

Other issues that FATA worked on include lobbying governments within South-east Asia to put pressure on banks and leasing companies to provide loan moratoriums to travel operators, and to come up with economic stimulus packages and financial assistance that benefit the region’s travel industry.

Our members, and FATA, have also collectively urged the regional governments to start opening the borders first to help restart tourism.

Why South-east Asia first?
South-east Asia has a population of over 622 million, thus the potential of intra-South-east-Asian tourism is comparable with that of European, Chinese, Indians or Americans travelling within their borders.

Ensuring that the travel and tourism industry here is the first to recover would mean instant activation of a wide-range of related micro-economies. The impact from the growth of tourism in South-east Asia will create curiosity and branding opportunities in international markets that will in turn develop an interest to visit the region.

Travellers are also inclined to travel closer to home as they are also concerned about future lockdowns (resulting from) new waves in the absence of a vaccine. The pandemic has left millions of travellers stranded all over the world, and memories are still fresh for many.

What are the most common concerns that FATA members have now?
With zero revenue as early as March and ongoing weak travel demand, members are worried if they will be able to sustain their operations until the industry fully recovers, and this I estimate, will occur sometime in 1Q2021.

Being able to sustain and pay staff salaries and office rentals as well as service business loans are major concerns of our members. Liquidity is another major concern as financial institutions see the tourism industry as high risk and are reluctant to give out loans.

Tourism companies also face angry customers and litigation as customers demand refunds for tour packages but the money is held by airlines, hotels and overseas operators.

The new normal calls for our members, who are already burdened financially, to further invest in health and safety protocols and this may require office renovations, digitalisation of operations, and purchase of personal protective equipment.

Prolonging border closures will not help to improve the dire situation of our members; that will do more harm. Travel agents and tour operators who depend on foreign tourists or who handle outbound markets have seen their businesses adversely affected. Some have stopped operating for good.

If borders remain closed for much longer, I foresee many more businesses shutting down and the industry will be left with only globally-owned companies and a few national players.

Are FATA members turning to technology to improve efficiency?
The push towards digital had already begun before the pandemic.

For instance, there was significant use of digital marketing and promotions. Face-to-face meetings at travel shows where buyers met with sellers were basically publicity exercises to firm up business contracts.

However, travel restrictions during the pandemic have led to an acceleration in the adoption of technology. Communicating and networking digitally via video platforms has become an accepted norm, whereas in the past, it was an alternative means.

I anticipate the use of technology will become more prevalent in the way businesses and networking are conducted moving forward.

How will travel and tourism change as a result of the pandemic?
The most pressing issue now is to work on standardising health and safety protocols so that it is in line with the World Health Organization’s standards.

Members are also advised to minimise contact points, and FATA has encouraged them to go digital and issue QR codes and e-vouchers to their customers instead. Members are also devising tour itineraries that emphasise social distancing, such as visiting less-crowded areas.

FATA has cancelled its annual convention this year due to the pandemic. What opportunities will there be for members to raise issues without the convention?
The FATA Convention was scheduled to be held in Phnom Penh in July. Instead of holding a physical convention, we held an online forum on June 19 with the theme, Way forward for tourism in ASEAN.

This was broadcasted live through the Malaysian Association of Tour and Travel Agents’ (MATTA) Facebook page, with panellists from South-east Asia’s national tourist organisations sharing recovery plans. FATA members also shared how intra-regional travel will change in the new normal and what various travel agent associations in South-east Asia were doing to rebuild travel confidence.

Does FATA have plans to work with counterparts in other parts of the world, for example, the European Travel Agents’ and Tour Operators’ Associations (ECTAA)?
The various member associations that make up FATA already work independently with various global partners. One of our objectives now is to consolidate and leverage this global network towards the benefit of South-east Asia.

For example, MATTA’s membership and working relationship with ECTAA has already opened up collaboration opportunities with FATA. This bond between regional associations will strengthen the tourism industries on both sides of the globe.

This is an extract from the original profile feature of the same title, published in TTGassociations July 2020.