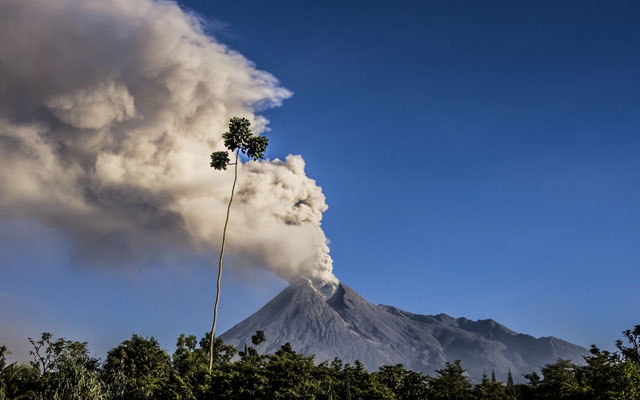 The volcano erupted at 05.33 on Tuesday, spewing a 6,000m column of ash into the sky, prompting state-owned airport operator Angkasa Pura to close the airport from 09.25 to 15.30.

Yohanes Sirait, manager of public relations of AirNav Indonesia, said that ash from the eruption had covered parts of the apron and runway of Adi Soemarmo International Airport.

During the airport’s closure, 13 domestic flights from and to Solo were cancelled, according to a press release by AirNav.

Novie Riyanto, director general of air transportation, Ministry of Transportation, said that he had rerouted several flights to destinations unaffected by the eruption.

“We will keep coordinating with AirNav Indonesia and airline stakeholders to ensure that flights remain safe and normal,” said Novie.

Tesa Puji Astuti, public relations and events manager of Surakarta-based Alila Hotel, said that ash rain caused by the eruption was so severe that it reduced visibility in Solo.

She said that five corporate clients from outside Solo who had planned to stay at her hotel contacted her today to reschedule their check-in date.

Though they did not reveal their reasons for doing so, Tesa suspected that the airport’s closure could have played a part in their postponement.

Edher Irwantoro, general manager commercial of De Tjolomadoe, a tourist attraction and events venue in Solo, which is located 35km from Merapi, said that he also experienced ash rain but that it did not affect visibility.

Business ran as per normal, he said, adding that the attraction saw 478 tourists that day, and that masks were provided for visitors in the morning.

Edher also said that the bulk of De Tjolomadoe’s visitors are made up of domestic tourists, who arrive by road. Therefore, footfall remained unaffected by the closure of Adi Soemarmo International Airport.

Similarly, Edwin Ismedi, managing director of Yogyakarta-based Trend Tour & Travel, said that his business was unaffected by the eruption as ash rain did not happen in the province.

He added that he did not receive inquiries on the eruption from his foreign business partners.

Edwin said that Mount Merapi’s eruption would not affect activities in the Yogyakarta city as long as cold or hot lava did not flow from the mountain top. Yesterday’s eruption only spewed ashes and did not affect visibility as the wind blew east towards Solo instead of southwards to Yogyakarta.

However, he said that he had prepared Pindul Cave and Indrayanti Beach in the southern part of the city as an alternative to Mount Merapi should the condition worsen.