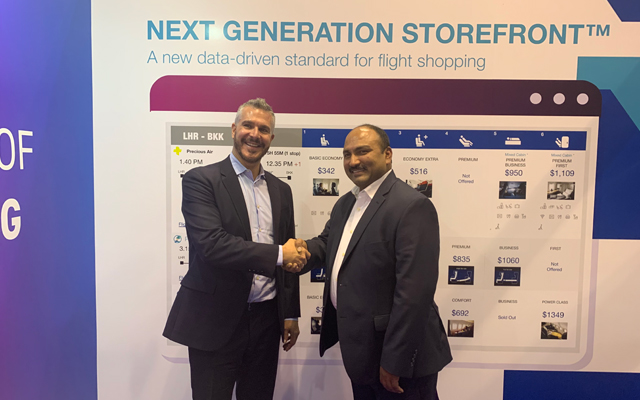 That the airline industry, unlike the sophisticated retailing techniques already dominant in other sectors, has yet to embrace the retail model fully in tandem with fast-changing consumer behaviour and preferences, was a common refrain expressed by airline executives during the recent IATA Airline Industry Retailing Symposium, which took place in Bangkok.

Amazon experience for the skies?
But in “an era of complete retail”, it is especially critical that airlines make flight shopping “far more intuitive” and “far more value focused” in order to attract a new generation of travellers who expect airlines to “offer the same level of personalisation as everyday retail they interact with”, said Henry Harteveldt, founder of Atmosphere Research Group, a consultancy focused on global travel.

Urging airlines to improve their flight shopping experiences by emulating successful retailers such as Amazon and Starbucks, whose sites offer rich product information, photos and videos, Harteveldt also advised greater and savvier use of the massive information that carriers have of passengers by delivering highly personalised offerings to fulfil as many travellers’ end-to-end needs and capture the maximum share of wallet.

Such a move will enable an airline to position itself as “a travel site, not just an airline site” to passengers, allowing it to differentiate from competitors, Harteveldt argued.

“We are at the point now where technology, the customer, and marketing and distribution all come together to support your ability to really be a complete retailer,” he stated. “We’ve got NDC (New Distribution Capability) now going; we’ve got companies that are certified level four or NDC at scale; and we’ve seen a huge amount of investment and effort by many airlines to participate in NDC and ONE Order… so a lot of the key obstacles have been removed or can be managed.”

Scaling up distribution of rich airline content
But disruption appears not far off on the horizon. The long-term retailing agreements that airfare clearinghouse ATPCO recently entered into with Sabre and Amadeus signal a major transformation underway in flight shopping.

Through the ATPCO partnership, airlines’ so-called rich content – including photos, graphics and videos of the product offerings on board, say, legroom or meals in any fare class – will be funnelled into both GDSs’ various flight shopping interfaces and applications serving travel agencies, OTAs, corporate booking tools and other sellers. Both travel technology companies have also pledged to support ATPCO’s Next Generation Storefront (NGS) standard.

Such partnerships are a “catalyst” in the modernising of the flight shopping experience, pushing the distribution of rich content into the next level, said Robert Albert, EVP retailing at ATPCO and founder of Routehappy.

Since launching Routehappy in 2011, Albert has been urging airlines to address the differentiated and unbundled offerings that have mushroomed in the industry over the last decade before his venture was acquired by ATPCO in February 2018.

Airline retailing capabilities and distribution have been a perennial “chicken and egg problem”, insisted Albert. “Airlines weren’t committed to rich content as there weren’t places to put the rich content, and sales channels weren’t committed to rich content because there wasn’t a repository of rich content,” he noted. “We hope (both the Amadeus and Sabre deals) are going to inspire the whole industry to get much more serious basically because there are so many more places to put it out.”

Ludo Verheggen, director of global air content strategy at Amadeus, agreed: “Airline retailing until now was very much price driven. And what we need to make sure is that it really becomes value proposition driven, so that the airlines can really convey correctly the whole value that they are bringing – what’s included in the fare but also what’s on board the flight experience. And it’s clear today there are limitations when it comes to how we convey that flight experience to travel buyers.”

More efficient workflow for travel agents
Besides enabling modern flight shopping at scale, another distinct advantage that the integration of ATPCO’s rich content through Sabre 360 platform is greater workflow efficiency for travel agents, said Rakesh Narayanan, vice president, regional general manager, South Asia and Pacific, Travel Solutions Airline Sales at Sabre, as agents no longer have to leave the Sabre interface to look up information on airlines’ websites or elsewhere and then come back.

“Earlier, it used to be through an API, and wherein every single request would have to come in and out of the system. A travel agent or website and OTA will go to RouteHappy/ATPCO for the content for the rich content, and to come to Sabre for another content,” Narayanan said.

“But now the agent just have to come to Sabre – the one pipe which is highly efficient and scalable, and where they will get the regular content plus rich content through the same pipe and the same interface. So that’s why it’s a huge leap forward for both the industry and both of us (Sabre and ATPCO).”

Furthermore, in an age where travellers are placing a premium on experiences, having access to such rich content will enable travel agents to play the role of consultants more effectively. Instead of a potential passenger having to visually imagine how products differ across airlines or classes when doing price comparisons, Narayanan has observed high-street travel agents “actually turning their screen around to show customers what exactly they’re investing into”.

Meanwhile, Sabre is currently working on pushing rich content distribution through APIs for OTAs, with “more progress and announcements coming in the next few months”, said Narayanan. “We’ll also integrate that into our passenger services, or CSS, the SabreSonic system. The agreement we have is a comprehensive one to cover every aspect of the distribution channels.”

The pace of rich airline merchandising adoption is only going to get quicker, insisted Albert. “One of the things that we’ve learned along the way is rich content is so much more complex than anyone realised at the beginning, and everybody has so much to do to make our technology work and transform flight shopping into the modern age… but we got a whole global interconnected industry that has to work together to change something, and it’s actually happened.”

But like most things related to airline retailing, industry players expect the integration to take some time before next-gen selling becomes a norm. “With NDC, the analogy was being made about the plumbing right now,” said Amadeus’ Verheggen. “I would say with rich content, the same is going to happen.”