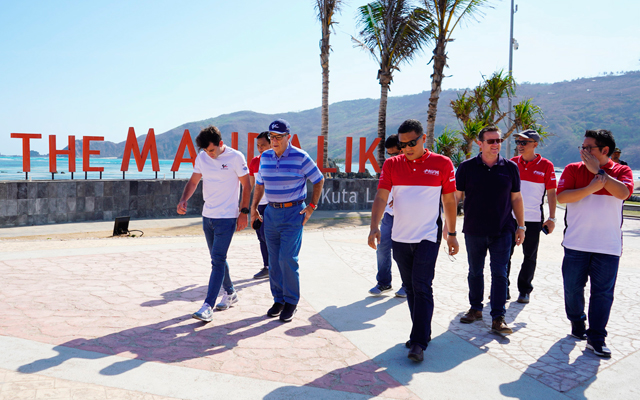 Scheduled to launch in 2021 leading up to its inaugural MotoGP 2021 race, The Mandalika – which is operated by the Indonesian Tourism Development Corporation (ITDC) – will also offer a mix of luxury accommodation and a multitude of destination activities, with year-round racing designed as a central attraction at the development.

The future of The Mandalika as a race destination will also extend beyond the MotoGP as the Jakarta central government has given the green light to add Formula One racing to resort’s future.

Stretched over a 16km ribbon of beachfront, The Mandalika resort in southern Lombok will feature up to 16,000 hotel rooms, a convention centre, 27-hole golf course, theme park, commercial facilities and retail shops.

The 4.3km Mandalika Street Circuit will feature some 18 sinuous turns designed to specific FIA and FIM grading, a first for the motorsport industry that meant rather than converting existing streets to form a racing circuit, the design allowed ITDC to remap the zoning of future real estate properties and proposed streets to allow for the necessary technical specifications that are required by the FIM.

The new circuit is uniquely built within the tourism complex, a track that wends past a variety of hotel accommodation, residential and retail facilities, a solar cell farm and then hooks around the Spectators Hill.

The racetrack straightaway features a covered paddock integrated in an exhibition centre and several grandstands seating 50,000 and swath of space for nearly 100,000 standing spectators.

Approximately US$25 million has been spent on key infrastructure projects in the construction of The Mandalika. In December 2018, ITDC confirmed further funding from the Asian Infrastructure Investment Bank amounting to US$248.4 million. As well, other international and countrywide investors have shown keen interest in the destination’s future.

ITDC’s CEO Abdulbar Mansoer said: “Our anchor partner and investor, French-based Vinci Construction Grands Projets (VCGP), will complete the rest of the circuit with the necessary facilities to run the races. The partnership with VCGP was finalised with the signing of a Master LUDA (Land Utilization Development Agreement) in 2018, which sees VCGP committing a total investment of around US$1 billion over the coming 15 years for the Entertainment District.”

Final funding to complete the entire infrastructure packages over the next decade will be a proposed US$89 million from Indonesia Exim Bank, according to Mansoer.

He added: “When completed, we expect the destination and race events will be well supported by local, regional and international motorsport fans as well as travellers seeking an all new experience, with or without races in mind.”