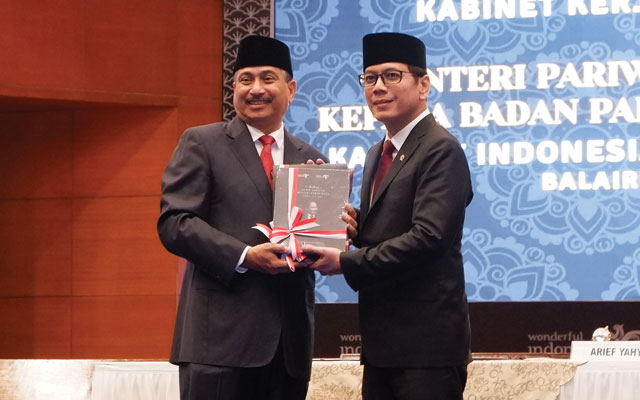 In a move that signals the acknowledgement of the growing significance of the creative economy in tourism, Indonesia’s Ministry of Tourism has been renamed in a nomenclature change as president Joko Widodo unveiled his new cabinet on Wednesday.

This rename returns the nomenclature to the Ministry of Tourism and Creative Economy during the term of the sixth president, Susilo Bambang Yudhoyono, between 2011 and 2014.

Wishnutama Kusubandio has replaced Arief Yahya as Indonesia’s new minister of tourism and creative economy, renewing optimism in travel trade members that Indonesian tourism can be further developed and its quality improved.

Hailing from a media background, Whisnutama began his career in the TV industry in 1994. The 43-year-old has had an illustrious career, starting as a supervisor and rising through the ranks to become president director. In 2013, he established Indonesia’s NET TV.

Whisnutama’s experience in the media and creative industry led president Jokowi to appoint him as creative director to helm the opening and closing ceremonies of the 2018 Asian Games.

Industry leaders in Indonesia’s tourism sector expect Whisnutama’s background and experience to serve him well in his new post and they are hopeful that he will be able to take the country’s tourism to new heights.

Budijanto Ardiansyah, vice president of the Association of the Indonesian Tours and Travel Agencies, commented: “We know that Whisnutama is a creative person, and I hope he can transmit his creativity into making (Indonesia’s) tourism more attractive. I really hope he will bring a new energy and more creativity that will further enhance the tourism industry.”

For Haryadi Sukamdani, chairman of the Indonesia Hotel and Restaurant Association, what matters is not the nomenclature change, but the choice of leader spearheading the office.

Haryadi said that Indonesia’s tourism industry needs a head who can hit the ground running. “We have no time to allow the leader (minister) to learn and start from scratch again otherwise Indonesia will be left behind.”

On the other hand, Budi Tirtawisata, chairman of the Indonesian Convention & Exhibition Bureau, said: “Whisnutama (who has no tourism background) may not be the figure that the industry projected for this post, but he brings new hope, especially to the (business) events industry.”

Budi’s hope is that the new minister would shine attention on the business events industry, which in the last five years, has been neglected by the government.

“I have no doubt that he can successfully bring tourism forward as long as he is willing to communicate with the industry and learn fast,” he said.

Hosea Andreas Runkat, chairman of the Indonesian Exhibition Companies Association (IECA), is also hopeful about the new appointment. “I hope that the new minister will not focus on the numbers only, but also on increasing foreign exchange and making Indonesian tourism more attractive. I really have high hopes that the new minister can see that there are two sides to tourism: Leisure and business events. And I think business events demand creativity, which is in line with the concept of creative economy.”

Hosea also expressed his desire for Whisnutama to engage more with the private sector and listen to their feedback. He said: “IECA and all the stakeholders in business events are eager to work closely with the new minister to take tourism to greater heights.”

Speaking following the handover of post from former minister Arief Yahya, Whisnutama said that a destination becomes unique if stakeholders and the community work together to creatively manage its nature. He reckons that creativity is not only key in managing products in the creative economy such as film and music, but also in tourism, especially with regards to how to make tourism destinations have unique attractions.

“Indonesia exhibits natural beauty. It’s a gift from God. It’s up to our creativity to turn it into an extraordinary attraction for tourists,” he said.

Although Whisnutama said that he needs time to learn and explore, he thinks that as a start, the tourism sector can create events to attract tourists to Indonesia.

He said: “Events can bring a different experience and attract people to come. Therefore, we must create events. If it is necessary, we will bid on an international event, as long as it is a good event and makes people want to visit Indonesia. Whatever the event, I hope it can be a good starting point for people to see Indonesia as a great country to visit.”