As Cambodia continues its aggressive pursuit for the yuan and arrivals from China continue to rise exponentially, questions are being raised about the impact on the country’s overall tourism landscape. 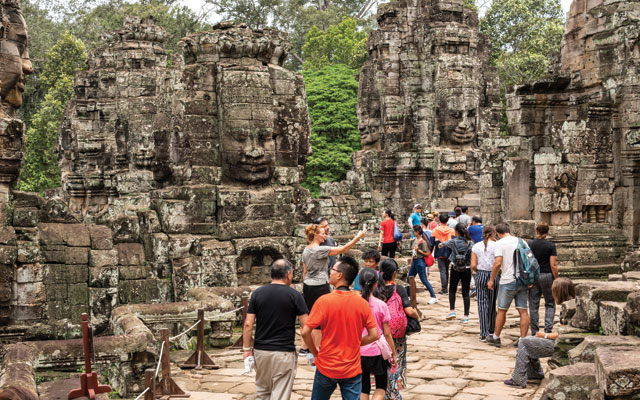 The world is hungering after a piece of the lucrative tourism pie in China amid Chinese’s growing appetite for outbound travel – and Cambodia is no different.

According to minister of tourism Thong Khon, the country aims to attract about three million Chinese tourists annually by 2020. This will rise to five million by 2025 and eight million by 2030. And with the country welcoming more than two million Chinese visitors out of a total of 6.2 million in 2018 – a 67.2 per cent year-on-year increase – it looks on track to hitting its target.

However, the rapid-fire growth has come with dire consequences. In the last few years, the coastal town of Sihanoukville has undergone a swift transformation from beach getaway to casino city. Tourism players say it is no longer viable to sell the beach to international visitors, who skip Sihanoukville for the more well-rounded islands off the coast.

Mick Spencer, owner of Ana Travel in Sihanoukville, said: “The only tourists [in Sihanoukville] are Chinese casino tourists. There is nothing for local or international visitors to do and nowhere for them to go. The islands are the only reason to be going through the town.

“The town is forsaken and it will be several years before we understand what it will look like in the future, by which time I would expect the only visitors to be Asian gamblers and their families.”

Steve Lidgey, general manager of Travel Asia a la Carte, said losing the key beach destination in Cambodia, which he called an “essential part” of a Western holiday itinerary, has had a knock-on effect on the industry’s efforts to sell Cambodia as a standalone destination to long-haul visitors. While inbound tourists from Asia have grown in recent years, those from the West have fallen.

Said Lidgey: “I believe people are avoiding Cambodia altogether and choosing other destinations for longer tours. If there is no easily-accessible, friendly, value-for-money beach destination, then travellers will instead spend their beach time, and possibly their whole trip, in Vietnam or Thailand.”

A fall in visitors to Angkor Wat has triggered a response from the government, who blames Chinese zero-dollar tourism packages for the slump. The country’s top tourist draw welcomed 1.4 million foreign tourists in the first seven months of 2019, representing a 9.7 per cent year-on-year drop. In July, visitor numbers fell by 19.7 per cent to 149,269 foreigners.

While the country’s tourism players say the blame does not solely lie with zero-dollar tourism, they have welcomed the government’s pledge to crack down on the industry.

Said Spencer: “The government is starting to realise that zero-dollar tourism is a real thing, and local economies and businesses suffer as a result.”

Ronni Dalhoff, managing director of Diethelm Travel (Cambodia), lauded the government clampdown on zero-profit tourism, which he said makes up the bulk of Chinese arrivals.

In 2016, the Thai government stamped out zero-dollar tourism, estimating annual losses of US$2 billion in tax revenue. In the wake of the clampdown, three companies were closed, 2,155 buses were seized, and several arrests were made for money laundering and operating illegal tours.

Lidgey commented: “The hunt for large numbers and meeting targets by attracting the Chinese, and a surge in low-budget tour groups that take up space but ultimately leave little revenue for the Cambodian people, is an issue.”

However, Dalhoff notes that while it is the low-budget segment disrupting the market, there remains huge potential in higher-spending Chinese travellers – and that is where the focus should shift.

He said: “There are two very different types of tourism. Chinese zero-profit packages are massively different to the upscale Chinese market, which everyone is very interested in.”

Miles Gravett, general manager of Khiri Travel Cambodia, added: “There needs to be more focus on quality tourists, and not just from China. A lot of zero-dollar tours don’t benefit the local economy, and that’s something that needs changing.”

Industry players also claim the chase after Chinese tourists has led to other key source markets being neglected. Lidgey noted: “While there are plenty of opportunities to make business from middle-class Chinese who can afford to travel overseas, Cambodian tourism authorities need to be careful. The old adage ‘Don’t put all your eggs in one basket’ applies here.”

The latest figures from the Ministry of Tourism show that as of June, arrivals from European markets fell 5.6 per cent while those from the US market dropped 5.3 per cent. In contrast, Chinese visitors rose 38.7 per cent, with a 15.9 per cent increase in arrivals from Asia.

Added Lidgey: “If the new-found wealth in China doesn’t last, or people are forced to tighten their belts, then the Chinese will see more value for their money in travelling domestically.”

Gravett warned that if proper measures and governance are not put in place to regulate the development, parts of the country run the risk of becoming Chinese gambling destinations. He said: “Cambodia is a beautiful country with so much to offer. It always has been a cultural destination and if it starts becoming known as a cheap package destination with a focus on gambling, this is bad for Cambodia and bad for everyone’s business.”

But the influx of Chinese tourists has added value and helped fill rooms in high-end hotels. One luxury hotel in Siem Reap said the rise in high-end Chinese visitors saw them through this year’s “tough” low season. It has since pledged to step up its chase for affluent Chinese travellers.

Sofitel Phnom Penh Phokeethra has also seen a “huge spike” in Chinese visitors at the hotel for both business and leisure. Area general manager Charles-Henri Chevet noted that about 40 per cent of the hotel’s guests are Chinese. He added that the hotel has “harvested a positive impact” from the growth.

Across the board, hopes remain high that a clampdown on zero-profit tour packages and a shift of focus into more upmarket segments will help bolster the industry.

Said Dalhoff: “China is the fastest-growing market and it’s not wrong to focus on them, but we would also like more focus on the Western market, and for a divide to be made between zero-dollar tourism and higher-end tourism.”