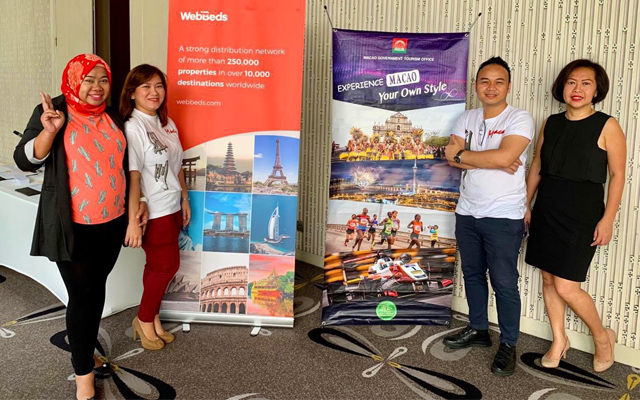 WebBeds has penned a major new agreement to promote Macau to the travel trade in Indonesia, as part of the Macao Government Tourism Office’s (MGTO) efforts to attract more visitor arrivals from South-east Asia’s largest and most populous country.

Under this exclusive new partnership, WebBeds and the MGTO will embark on a nationwide promotional campaign from August 1 to December 31, 2019.

The campaign kicked off with a recent Jakarta workshop hosted by WebBeds for its key travel agency clients in Jakarta. Held at DoubleTree by Hilton Hotel Jakarta – Diponegoro, the event enabled MGTO representatives to meet with local travel agencies and showcase Macau’s attractions to Indonesian travellers.

In addition, WebBeds has also partnered several prominent hotels in Macau, including MGM Cotai and Hotel Lisboa, to offer exclusive rates through this campaign to attract more Indonesians to the city.

WebBeds will also offer triple FIT Points for all bookings of Macau hotels made by its Indonesian clients during the campaign period, as part of its popular FIT Rewards programme.

In 2018, 173,836 Indonesian travellers visited Macau, which makes it the city’s 10th largest source market. However, the MGTO believes there is strong potential for future growth due to rising affluence in Indonesia and the country’s vast population of 264 million people.