Amid a domestic travel slump, Indonesian hotels are finding cheer in more international air services linking up the country to new markets. By Mimi Hudoyo 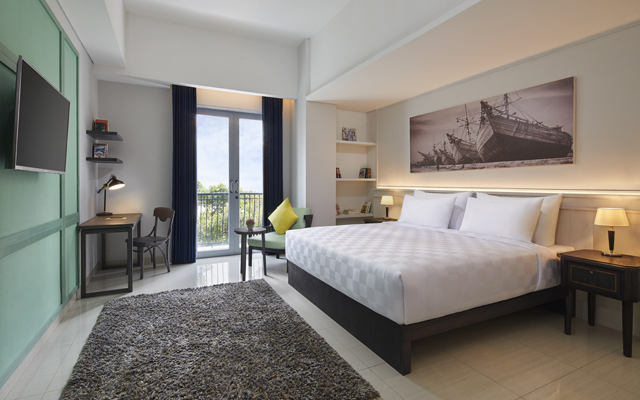 While high airfares continue to hinder domestic tourism, the Indonesian hotel industry is generally upbeat about business prospects this year, finding bright spots in the crop of new air connections which are expected to open up new markets to the destination.

Indonesia’s domestic market has been a traditional stronghold for the hospitality sector, although surging domestic ticket prices this year have affected the travelling patterns and demands on the homefront.

Sudarsana, general manager business development of Santika Indonesia Hotels and Resorts, said: “The airfare hikes have particularly affected our properties outside Java,  such as in Makassar, Bangka and Belitung.

“Business travellers (from Jakarta) used to travel twice to three times a month now they travel once a month. Some even make a visit once every two months,” she added.

“Luckily for our hotel on the island, we are strong with the government meetings,” she remarked.

But Indonesian hoteliers are finding positive momentum in the new air connections coming into the country, especially Bali.

Aeroflot and Rossiya Airlines have earlier launched their joint services between Moscow and Bali. Virgin Australia has commenced its seasonal Darwin-Bali service on April 10, and VietJet started its five-weekly flights from Ho Chi Minh City to the island on May 29. Coming up, Turkish Airlines will commence its Istanbul-Bali service in July.

Bali, Lenny Willyana, director of sales and marketing at Discovery Kartika Plaza Hotel in Bali, hopes that the crop of new direct international connections will encourage longhaul customers to stay longer in the destination. “Travellers will have more days and choices to explore more parts of the island.”

“We are hoping this would give good impact to Jambuluwuk Gili Trawangan (during the summer peak season), as the island is recovering (from natural disaster last year),” she noted.

Traffic from the UK market is starting to pick up for Jambuluwuk, while in Bali the hotel group is working with inbound operators specialising in the Indochina market to capture new markets, Mella shared.

Mella explained: “Apart from China, the Indian market to Bali has been growing (in the last couple of years), so we started participating at SATTE since last year.”

Santika Indonesia Hotels and Resorts, on the other hand, is looking to Eastern Europe as part of its market diversification strategy.

“This is a resort targeted for the European market. Samaya Ubud and Anvaya Seminyak, which are also part of the Royal Collection brands in Bali, are popular with this market,” said Cita.

Seeing the healthy growth of the Middle Eastern market, Jayakarta Hotels & Resorts is tapping the Iranian market, particularly for its Bali property as well as The Jayakarta Inn & Villas Cisarua, Mountain Resort & Spa near Bogor – the latter is a popular destination with the Middle East market – according to Made.

She also sees opportunities for properties in Lombok and Labuan Bajo (Komodo) with the European and Australian markets, thanks to the improved accessibility in West and East Nusa Tenggara.