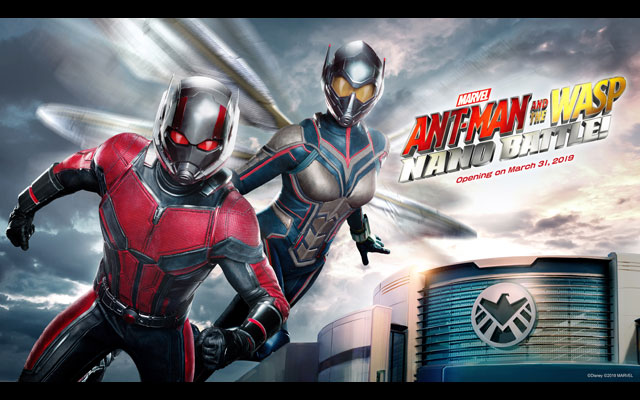 This upcoming attraction is the result of a “close partnership” with Marvel Studios to “transform the powerful cinematic appeal into an immersive battle experience”, with the movie director, leading actors, as well as the score composer of Ant-Man and The Wasp all involved, said Bryan Thombs, creative director of the attraction from Walt Disney Imagineering.

This high-tech interactive adventure begins with a visit to the S.H.I.E.L.D. Science and Technology Pavilion. The visit will soon be interrupted by Hydra, which is not only attempting to steal the Arc Reactor atop Stark Tower in Kowloon, but its artificial intelligence Arnim Zola has also sent an army of Swarmbots to infiltrate the S.H.I.E.L.D. Pavilion in order to steal a Data Core that contains highly confidential information.

As he battles Swarmbots in Kowloon, Iron Man calls in Ant-Man and The Wasp to defend the pavilion, because only they can shrink down to get between the bots’ armour to destroy them from the inside.

And that’s where guests come in to help Ant-Man and The Wasp. Aboard one of S.H.I.E.L.D.’s newest combat vehicles, D/AGR, the Defense/Assault Ground Rover (aka “the Dagger”), guests are issued an EMP Blaster and engage in a battle alongside Ant-Man and The Wasp to defeat Zola and his Swarmbots.