Some stay while others go and come back later. China’s cruise market is not for the faint-hearted but rewards may be bigger for those who stick around. 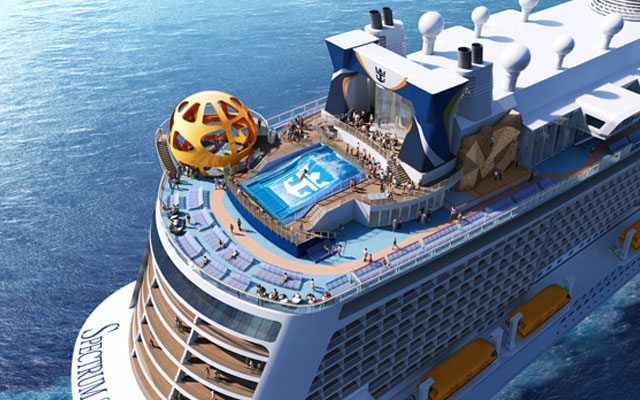 Royal Caribbean International and Dream Cruises are two cruise lines that stand to benefit from Norwegian Cruise Line’s (NCL) decision to pull Norwegian Joy out from March 2019 and return to China to operate seasonally from summer 2020.

One successful ship which accommodates more than 4,000 guests is out of the way as the two companies ramp up on China homeporting. Royal Caribbean will introduce its first Quantum Ultra class ship, Spectrum of the Seas, which has room for 5,622 guests, from June 2019. By then, the line will be fully deployed in China with Spectrum in Shanghai, Quantum of the Seas in Tianjin and Voyage of the Seas in Shenzhen and Hong Kong. Royal Caribbean International’s president China and North Asia, Zinan Liu, said Spectrum would reach “new milestones in the luxury cruise sector in China”. Dream Cruises will continue to dual-homeport World Dream in Hong Kong and Guangzhou’s Nansha next year while waiting for a new Global Class ship, which will debut in 2020. Not only will the third ship be 25 per cent larger and double the capacity of her sister ships, it will be “a pace setter” with “focus on Asia, and more specifically China”, said Thatcher Brown, president, Dream Cruises.

In the face of lower ticket prices as a result of explosive capacity increase during 2016-2017, both players have similar strategies: pump in more luxury, in the belief the Chinese consumer has evolved and will be swayed to cruise by more innovative products and destination experiences. They also vow to continue training and educating smaller agents to sell cruises, so they can break through the predominantly wholesale charter distribution that is also partly responsible for China having low repeat guests compared to the US. Both acknowledge the need to create more enticing and longer itineraries.

Without revealing details, he said: “The exciting sailings include 17 well-selected long ones – six or more nights – taking guests to their favourite Asian destinations; eight warm winter sailings bringing guests to subtropical and tropical destinations and providing an escape from the chilly winter weather; 12 weekend sailings, each of which lasts for three to four nights, tailor-made to meet millennials’ needs for a brief escape from the hustle and bustle of their urban life; and special holiday/festival sailings to discover new cultures and traditions.

“Instead of reducing the number of cruise ships or cutting down the sailing season, Royal Caribbean International has always sought a more sophisticated way to serve the Chinese customers, i.e. by offering new, groundbreaking and customised options such as top-choice staterooms, meals, entertainment, shops and even destination tours,” Liu said.

“As the cruise market continues to evolve and mature, so will the need to provide a variety of cruise products that will be able to accommodate the various needs and tastes of a new generation of travellers. We must continue to educate and support our industry partners so that they can help us grow our addressable cruise market in China.”

Geopolitical crises such as the spat between China and South Korea which affected some routes could of course happen. But overall, they believe the market will continue to grow and evolve. In just four years, the number of Chinese cruisers has grown five-fold to almost 2.5 million, a rate the cruise industry has never seen before. “With advancements in high-speed rail connectivity and the continued growth of value regional carriers, there is opportunity to reach new audiences throughout China,” Brown added.

Cruise experts observe that cruise lines with larger fleets, such as Royal Caribbean, have the ability to be patient as the market catches up, knowing the long-term result will be very strong. And though Dream Cruises has but only two ships at present, as an Asian company it might be more committed to the region while parent company Genting Hong Kong has more experience with Asia/China from a long history of building up the Asian cruise market with Star Cruises.

Still, it is unlikely cruise lines will be that patient if the market is a lost case, which China is not. Royal Caribbean Cruises during earnings call on July 26 said China sailings had “performed very well” and bookings were “nicely ahead” in both volume and rate for the rest of the year and into next year.

Genting Hong Kong’s 2017 financial results revealed that Dream Cruises, launched slightly more than a year ago, is “performing well with improving occupancies and net yields in both the Hong Kong/Guangzhou and Singapore markets”.

The Norwegian Joy too performed beyond expectations. Steve Odell, Norwegian Cruise Line Holdings’ senior vice president & managing director Asia-Pacific (including China), told TTG Asia: “Norwegian Joy was profitable in China and very well received by the local market in her first year of operation (ending June 27).  She has the highest occupancy and guest satisfaction ratings of any ship in our fleet.”

But demand and yield are stronger in the rest of the world, and the cruise company said it was monetising it and driving higher shareholder returns by moving the ship.

NCL wasn’t the first to stop homeporting a new made-for-China ship in China. Princess Cruises originally announced its China-centric Majestic Princess would be homeported in China, but that never happened.

“We found we could have more success if we complemented our peak summer season in China (July/August) with deployments from Taiwan (spring) and Australia (winter). “That’s what we’ve done this year and that’s what we plan to do again in 2019,” said Stuart Allison, Princess Cruises’ senior vice president, Asia-Pacific commercial & operations.

Ken Muskat, CEO of just-defunct SkySea Cruise Line, giving his personal opinion, said China is going through a period of “right sizing”, which is needed, and will remain a key strategic development market for the cruise industry, perhaps just at a slower pace than in the past.

“The market will benefit greatly from the newer and larger ships being deployed in China, the focus on finding new destinations, and offering longer itinerary choices. The business practices of the evolving trade distribution needs time to catch up and make an impact which is beginning to take place. The support of government entities is more prevalent than ever across China which continues to provide confidence to the cruise lines. These are all positive signs to the market becoming more mature and understanding what needs to happen for long-term success.”