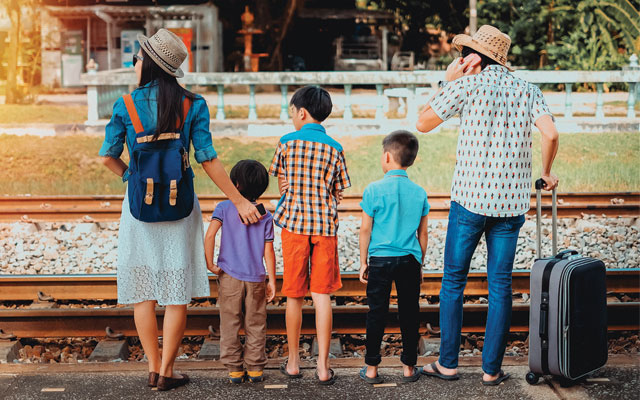 New school semesters may already underway after the mid-year break, but that doesn’t mean families are packing away their travel gear just yet.

In fact, new research from Agoda revealed seven out of 10 families globally take at least two family vacations a year, with Asian travellers taking more than twice as many family trips as their Western peers (five trips a year versus two).

The Agoda Family Travel Trends 2018 survey, conducted by YouGov, found that just 18% of travellers globally take only one family holiday a year, while over 34% have taken more than five family trips in the past year.

Asia dominates this multi-holiday trend with 77% of travellers from Thailand and 62% from the Philippines claiming to have taken five or more family breaks in the past year. Conversely, only 7% of British travellers took more than five family trips, with the UK also most likely (34%) to take only one.

A four- to seven-night stay is the most popular duration for family holidays globally but there are large variances across markets.

In the UK, a four- to seven-night stay made up 41% of family travel in the past year, compared to only 20% of family travel for Thais. Instead, family vacations of more than 14 nights are taken by almost a third of Thais but only 11% of Malaysians. Vietnamese, Malaysian and Chinese families are most likely of all travellers to take one- to three-night vacations.

The study also found that Asian travellers engage in more multi-generational and extended family trips. Thais (66%) and Indonesians (54%) were most likely to have included grandparents in their holiday plans. This trend is also reflected when looking at extended family members with Thais and Indonesians most likely to include siblings, cousins, aunts and uncles in their vacation plans.

While 35% of global travellers have taken a holiday with grandparents, respondents from the UK and Australia are the least likely to have done so, with only 13% and 20% of embarking on them respectively.

It is not just family members that the Americans, British, Australians and Chinese don’t travel with, they are also the least likely travellers to go away with other groups of friends, with only 22% of Americans, 23% of Brits, 26% of Australians and 27% of Chinese having done so in the past year.

Meanwhile, almost half (48%) of travellers from the Philippines tie up with a group of friends for some of their vacations, closely followed by Vietnamese and Malaysian family travellers at 43% and 40%.

Hotels are still the most popular accommodation for families, followed by holiday homes, B&Bs and all-inclusive resorts. Cost, safety and activities were the top global considerations for when planning family holidays compared to holidays with non-family or alone.

When it comes to travel motivation, travellers globally look forward to quality family time (68%) the most on family trips. Relaxation (66%) and trying new things (46%) came out as second and third preferences.

British and Singaporeans are the most adventurous on family trips. Exploring new cultures as a family travel experience is most popular among these two groups (48% and 46% respectively). Chinese and Thai travellers are the least likely to investigate new cultures on their trips, (both 29%).

Brits seemingly have the least worries when it comes to family holidays, with nearly a third (27%) saying that they have no concerns at all.