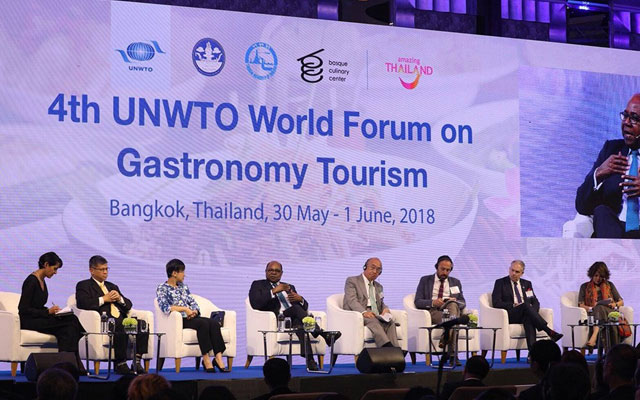 The 4th UNWTO World Forum on Gastronomy Tourism, which took place in Bangkok last week from May 30 to June 1, concluded with industry players’ strong commitment to promote gastronomy tourism across Asia-Pacific through creative story-telling, supportive policies and improved training.

Held for the first time in Asia, the forum was organised by the UNWTO and the Basque Culinary Centre with the support of the Tourism Authority of Thailand (TAT) and Thailand’s Ministry of Tourism and Sports. Close to 600 delegates participated in the forum in Bangkok. The conference is focused on raising awareness both nationally and regionally as to the significance and role of gastronomy tourism as a key towards the development of sustainable tourism in the region.

“Thai cuisine helps us to drive tourism and boost spending. In 2017, 20 percent of our tourism revenue was on food. We are hoping to increase that in the years ahead,” he said.

Yuthasak Supasorn, TAT governor, also noted that both “gastronomy” and “tourism” are interlinked.

“Both are evolving in line with demographic and technological changes, and both have their roots in traditional culture and tradition. They create opportunities across the entire chain of command, from upmarket fine-dining restaurants to street vendors. They all have their unique characteristics which can change literally from one village to the next.”

The 5th and 6th UNWTO Gastronomy Forums will be held again in Europe in 2019 and 2020. Meanwhile, Indonesia is planning to host an ASEAN Gastronomy Tourism conference in 2019, according to a TAT press release.