After years of pursuing growth by the numbers, the global travel industry is finally getting a grip of the problems that mass tourism brings. Industry leaders tell Xinyi Liang-Pholsena why the sector needs to act now 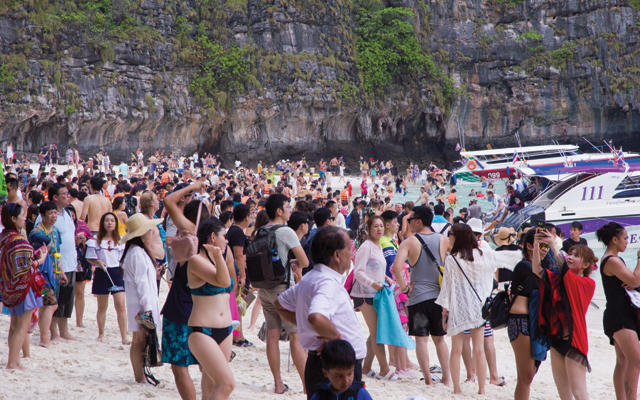 There are more tourists now than ever before, thanks to the explosive growth of the Chinese outbound market and the ever-growing middle class worldwide. International tourist arrivals grew by a remarkable seven per cent in 2017 to reach 1.3 billion, according to UNWTO, and is projected to reach 1.8 billion by 2030.

But with record visitor numbers many destinations and communities in Asia are starting to see the toll of tourism, and along with it resentment and backlash to the problems that unrestrained growth brings.

The forced six-month closure of Boracay after Philippine president Duterte labelled it a “cesspool” reflects the pressure South-east Asia’s once-idyllic islands are now under. Since last year, Thailand’s Phi Phi island will be temporarily closed for four months each summer to allow for rehabilitation, while the rising tide of plastic rubbish on Bali’s beaches has become a major concern for visitors and residents on the famed Indonesian island.

Japan, which received 28 million foreign tourists in 2017, is witnessing the impacts of surging tourism numbers on the quality of life for residents. “Kyoto and Mount Fuji are probably the best – or worst – examples suffering from overtourism,” remarked Masaru Takayama, president of Spirit of Japan Travel and founding chair of Asian Ecotourism Network (AEN).

“Kyoto, where I am born and raised, is suffering tremendously,” he lamented. “The chronic traffic jams, the locals especially the elderly can’t even ride the buses, graffiti, misbehaving tourists that taint our culture, throwing trash on the street, late-night parties at guesthouses despite the code of conduct stated by the community, and the list goes on.”

Clarion call for tourism planning
For too long, long-term planning and development was sorely lacking in many destinations as governments were caught up in the aggressive pursuit of tourism growth and numbers, pointed out Randy Durband, CEO of Global Sustainable Tourism Council (GSTC).

In the past 18 months, media attention on the problems surrounding mass tourism in such iconic destinations as Venice, Barcelona and Iceland has intensified worldwide, driving a greater awareness of overtourism and prompting calls to action in the global travel community.

“Finally the world is waking up to the fact that we can’t put money only to promotion but into development and management; we have to measure visitor satisfaction and also community satisfaction,” Durband said.

“I think governments were asleep, they didn’t see it coming. Governments typically put money into just promotion, anything into development were just small. Suddenly there’s an awareness as it hits them in the face as they realise they need to put resources into planning. And because they are all so late into the game, we’re going to see more pain for a while until they learn to manage better and disperse the visitors,” he added.

Takayama is heartened that there is “positive movement on the discussion level” for tourism to be more sustainable but concrete actions – and awareness – have yet to take root among the government sectors and mainstream tourism industry.

“(There are still) very little actions on the ground. In my personal opinion, the travel agents are probably the worst of all. The mainstream travel agencies’ top priority is to make businesses out of tourism and the benefits to the host destinations are often overlooked.”

It is with the aim to galvanise industry players into action that Takayama, together with six other agencies, founded the Japan Alliance of Responsible Travel Agencies last month to establish a platform comprising regional and local travel agencies and operators to maximise benefits to the host destinations and tourism stakeholders, including educating and training the industry players.

Takayama stated: “The voices of the locals need to be incorporated so that the tourism destinations first become a good place to live, way before making it a good place to visit.”

He added: “Sustainable development makes sense for every kind of tourism regardless of the size and scale. We all must be involved as there’s only one planet, so I’d highly encourage everyone to be in the game – the tourism sector has a lot of roles to play and industry players have the capacity to deliver them.”

The case of Thailand: what’s after 35 million arrivals?
One of Asia’s most popular destinations, Thailand will likely be the envy of many destination marketing bodies, going by traditional tourism performance markers.

With the exception of the coup year in 2014, Thailand’s inbound arrivals have been on an upward trajectory in the last decade, with the Chinese market a major driving force to push its annual tourist numbers to over 35 million in 2017, equivalent to half of the country’s population.

But Tanes Petsuwan, Tourism Authority of Thailand’s (TAT) deputy governor for marketing communication, acknowledged that a different gameplan is now needed – and it’s no longer about pursuing numbers.

When asked what Thailand’s 2018 tourism targets are, Tanes affirmed that tourism revenue will take precedence, unlike previous years. “TAT in the past has been counting numbers as KPI, but the present minister (Weerasak Kowsurat) set a different KPI, signifying a clear tourism direction for the country,” he said.

“Increasing visitors is not a challenge – we’re already very good at it,” Tanes remarked. “But the challenge now is how to balance 35 million for different markets, segments, etc, to ensure that they’re travelling at the right time, to the right places and delivering true benefits to communities,” he continued, emphasising that dispersal of tourists is critical.

Of the opinion that NTOs should give greater weight to social and environmental responsibility in their destination marketing, Tanes revealed that the TAT takes into account the carrying capacity as well as the market segment that each destination is suited for.

Jiraporn Prommaha, director of international affairs division, Ministry of Tourism and Sports Thailand, who together with Tanes were among the speakers at a panel discussion organised by AEN in Bangkok earlier this year, added: “We are trying to push for CBT to disperse tourists away from popular sites beyond Bangkok, Chiang Mai or the beaches to promote the ‘unseen Thailand’.”

But when asked how Thailand could cope with the influx of visitors from China, which alone contributed one-quarter of Thailand’s inbound arrivals last year and is still a growing market, Tanes is confident the changing preferences of Chinese travellers as they evolve into FITs will soon put such concerns to rest.