Asia’s aquariums are pulling out the stops to present guests with more than giant fish tank displays. Can conservation and animal welfare interests co-exist with their pursuit of the next visual and entertainment height? TTG Asia reporters find out 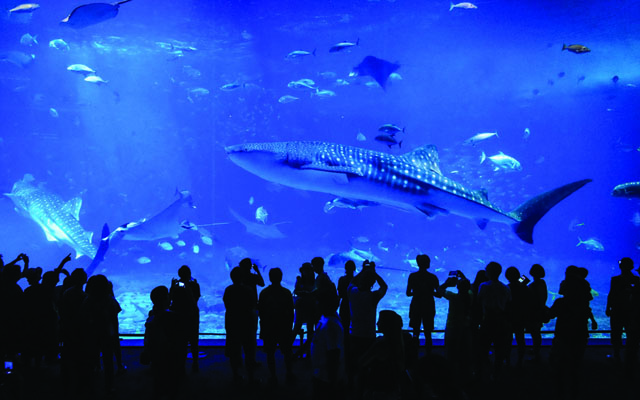 When Blackfish, a documentary that brought to light the alleged mistreatment of killer whales at SeaWorld Orlando, was released in 2013, it unleashed a whirlwind of negative press and public outrage unto the marine theme park. SeaWorld Orlando continues to feel the wrath of the PR disaster to this day, with a sea of red in its finances, leaders abandoning ship and large-scale boycotts as recently as in March this year.

In Asia, the lessons from SeaWorld Orlando have not fallen on deaf ears. Aquarium operators are giving more thought to the long-term sustainability of the business – with a greater emphasis on conservation interests and animal welfare. And perhaps more often, efforts to stay viable and competitive are focused on innovative storytelling that makes modern aquariums more than just giant fish tanks.

Simon Foong, group managing director/CEO at Aquawalk, which owns and manages Aquaria KLCC, summed this up when he remarked that successful aquariums must  have elements of not only entertainment, but also education and conservation.

Animal welfare key to longevity
Jason Horkin, senior vice president of attractions at Resorts World Sentosa (RWS), observed that environmental conservation is becoming a notable trend in the sector, with a sizeable portion of the market becoming more eco-conscious.

To appeal to marine conservation enthusiasts, S.E.A. Aquarium at RWS recently launched a new conservation group, Guardians of the S.E.A.A. Members of the group enjoy exclusive invitations to curated events such as conservation talks and outreach activities, Horkin shared.

In Australia too, many aquarium operators believe that taking the conservation message to the community is both an act of environmental responsibility and a good long-term visitor strategy.

“(Conservation) is very much on trend in terms of growing interest and how we relate that story to our guests, and also getting involved in activities like beach cleaning,” said Rob Smith, Australia and New Zealand regional director for Merlin Entertainments, which operates the Sea Life aquariums in Melbourne and Sydney.

Meanwhile, in the pipeline for Aqua Walk is Aquaria Phuket opening this year-end in the Central Festival Mall, revealed Foong. The new attraction will incorporate a combination of real and virtual fishes, which Foong says solves ethical and logistical issues of confining whale sharks and dolphins in aquariums, as well as brings down the operating costs.

The aquarium will also work closely with Chulalongkorn University on research and breeding fish, information that would be shared with other aquariums.

Ocean creatures, visual effects stars of the show
With entertainment value arguably still of greater immediate relevance to the visitor experience, many aquarium operators TTG Asia spoke with were quick to highlight how they are enhancing visual impact and interest value with technology and innovative storytelling.

While pools where visitors can handle some marine species have become de rigeur at aquariums, more venues are devising new ways to display their marine attractions as they would appear in the wild.

In some facilities in Japan, this includes the use of projection mapping facilities and lighting to simulate the open ocean and to show the creatures in their natural habitats.

A short rail journey south of Yokohama, the Hakkejima Sea Paradise aquarium – which attracted 1.6 million visitors in 2017 – new innovations have been rolled out in recent months.

“We installed a 457-inch LED screen to deliver dramatic presentations in conjunction with projection mapping technology in the (animal) performance area,” shared Kosuke Sudo, deputy head of operations at Hakkejima.

In Australia, Cairns Aquarium – the country’s newest aquarium in 18 years – is located in one of the most biologically diverse areas in  the world, putting it in prime position to feature marine animals unique and endemic to the area, some of which are critically endangered.

Yet, general manager Julie Cullen says the aquarium, which opened last September, has chosen also to give its visitors a rainforest and reef experience.

Cairns Aquarium also boasts acrylic underwater viewing tunnels for visitors to crawl through, including a coral cay allowing explorers to pop up in the middle of a refloat and see how the animals move with the tide. There are also plans to launch student sleepovers in its Oceanarium, which houses large sharks and stingrays in a big circular area.

Merlin Entertainment is also creating immersive experiences for visitors with storytelling at its core. Sea Life Sydney recently introduced what it says is a first-of-its-kind penguin exhibition ride, allowing visitors to move through an area designed to resemble the habitat of sub-Antarctic penguins on a small boat.

“What we’ve tried to do here is tell the story of Australia’s Macquarie Island,” said Smith. “You’re able to see and hear the penguins trumpet their noise, which very much brings to life their daily environment.” Sea Life Sydney will also launch a cageless shark dive experience in May.

At Kyoto Aquarium, the emphasis has been on holding unique seasonal events designed to encourage return visits through the year, such as the use of augmented reality technology for its “Hado Shoot? Monster Fight” event last year.

More aquariums in Japan are also trying to raise the visual “wow” factor with size, such as the colossal window on the main tanks at the Okinawa Churaumi Aquarium, which is nearly 9m tall and more than 22m wide, giving visitors a view of hundreds of sea creatures in the pool beyond, which includes no fewer than three whale sharks, the longest of which is 8.7m from snout to tail.

While visual impact can be achieved through size, Foong opined: “It is not about having the largest aquarium, but about doing things differently – using technology and being able to come up with creative displays and exciting programmes that will win hearts.”

Aqua Walk plans to open a new aquarium in Ho Chi Minh City that incorporates high-definition projections and augmented reality (AR). The company is currently on the lookout for a suitable space.

In Singapore, aquariums are filling their year-round calendar with themed performances and seasonal events.

For example, during the recent Lunar New Year, Wildlife Reserves Singapore featured a special manatee show in its River Safari aquarium, the Amazon Flooded Forest, coupled with a zodiac predictions trail. Last year, it brought in a local jazz  saxophonist and a 2m-tall cabbage cake to celebrate a manatee’s birthday.

Role of aquariums in education
While cynics may see animal welfare as an afterthought to fanfare, the two may not be such disparate concepts after all.

Education, the third element of successful aquariums that Aquawalk’s Foong highlighted, is becoming a key way of marrying entertainment and conservation.

The S.E.A. Aquarium at Resorts World Sentosa has adopted an annual Lunar New Year affair named Gong SEA Fa Cai. During this event, guests are treated to an underwater dragon dance performance and can learn about marine species that are auspicious in Chinese culture – as well as how to save the ocean – through an “edutainment” trail.

Said Horkin: “Through the extensive range of educational programmes, experiences and events, the aquarium aims to increase visitors’ knowledge on aquatic ecosystems, and inspire positive change towards protecting marine species.”

He added that S.E.A. Aquarium helps promote tourism in Singapore by presenting itself not just as a tourist must-see, but also as a “marine classroom to connect the public closer to marine life”.

Also notable is Aquaria KLCC’s recent addition of an AR experience, where endangered animals as well as extinct animals are brought back to life and roam free.

Similarly, Sea Life Malaysia, which will open its doors at Legoland  Malaysia Resort in 4Q2018, is aiming to engage and inspire children to learn and care about the ocean  and its inhabitants through compelling storytelling and up-close interaction.

Occupying 2,123m2 of land space, the two-storey aquarium will have more than 25 display tanks in 11 habitat zones, featuring thousands of sea creatures.

To enhance the learning experience, Sea Life Malaysia will include interactive elements in every habitat zone. For instance, kids visiting Rock Pool will be able to get hands-on experience to learn more about the natural habitat of Rock Pool, as well as  its impact on many other sea creatures.

There will also be a behind-the-scenes tour allowing guests to learn about animal care and food preparation for all sea creatures.

Kurt Stocks, general manager at Legoland Malaysia Resort, which partnered the Sea Life chain to bring the attraction to Malaysia, said: “Quite possibly we will attract a new segment of tourists such as researchers and conservationists.”