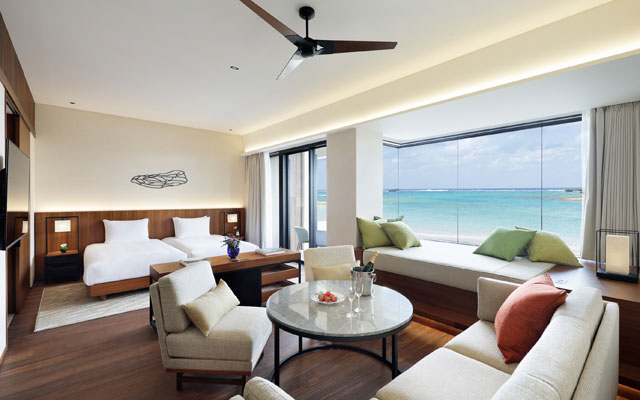 The Sukhothai Shanghai, China
The Sukhothai Shanghai has opened with 170 guestrooms and 31 suites ranging from 44m2 to 172m2. Recreational facilities include a spa, gym, yoga and pilates studio, 25m-long heated indoor pool, sauna and steam room. There are also five F&B venues, one of which is headed by Michelin-star chef Theodor Falser. For meetings and events, the second floor is home to the Grand Shanghai Ballroom and six multipurpose rooms. The hotel is part of the HKRI Taikoo Hui mixed-use complex, which also includes Grade-A office towers and a shopping mall. Sheraton Grand Bengaluru Whitefield Hotel & Convention Center, India
Marriott International has opened its 100th property in India, the Sheraton Grand Bengaluru Whitefield Hotel & Convention Center. The hotel boasts 360 guestrooms including 39 suites, all of which are equipped with a 48-inch LED flatscreen TV, minibar and The Sheraton Signature Sleep Experience. There are six F&B venues, as well as an outdoor swimming pool, a fitness centre and a spa with five treatment rooms. Meeting and event planners can avail the hotel’s 6,072m2 of function space spread over 12 meeting rooms, including 2,602m2 in the adjoining Convention Center. Hyatt Regency Seragaki Island Okinawa, Japan
The first Hyatt-branded beach resort in Japan stands on its own island approximately an hour’s drive from Okinawa’s Naha Airport. Of the 344 rooms, 320 will be housed in a seven-storey wing on Seragaki Island, while the remaining 24 will occupy a three-storey beachhouse on the Okinawa side. A short bridge links the two zones, both of which have direct beach access. Standard guestrooms on the Seragaki side start at 38m2, while the 24 beachhouse rooms range from 55m2 to 79m2 and come with kitchenettes or kitchens. Amenities include six dining outlets, five flexible banquet venues from 90m2 to 150m2, as well as a Seragaki Island Chapel. Bookings are now open for stays from September 1 onwards. Glow Ao Nang Krabi, Thailand
Glow Hotels & Resorts has a hotel in Krabi. The property, located near the beaches of Hat Noppharat and Ao Nang Beach, offers 130 guestrooms. Rooms have four configurations and come with a choice of pool, hillside, town or terrace views. Facilities include free Wi-Fi, an air-conditioned gym, as well as two restaurants – Café’ Au Lait, for breakfast and cooked-to-order dishes; and Chen’s, for casual poolside dining and cocktails.