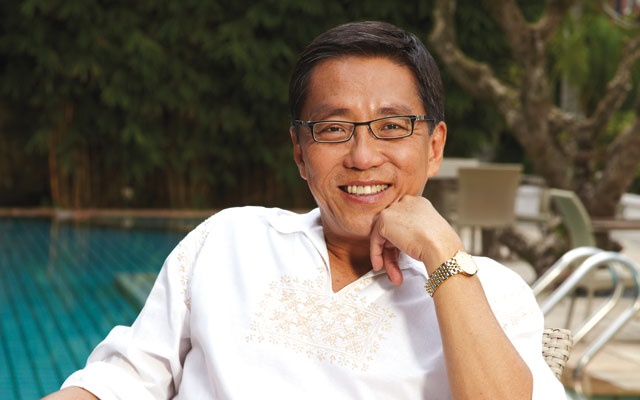 How did CSR come to be a part of the Banyan Tree ethos?
When we got involved in CSR in the 1980s, it wasn’t the buzzword it is today. It started two ways – one was my wife’s and my own academic inclinations. She did development sociology and I did economic development. So we were concerned about issues of poverty, rural sociology (and the like).

But even then it was just a general interest. What was visceral was me buying a piece of land in Phuket on impulse. It was a disused tin mine totally polluted by chemicals which I didn’t know about. It was while trying to rehabilitate that wasteland, which is now Laguna Phuket, that I learnt viscerally how tourism and development is a double-edged sword.

I’ve also subsequently seen it with other projects where people take a piece of forested land by the sea, clear the land and have the soil wash into the ocean and destroy the corals. Worse still you see social dislocation because you get these expensive luxury hotels charging for one room night what a villager would earn in one month.

But tourism can also uplift people in places where the areas for employment are small. So you get that sense of responsibility and realise CSR is no longer a nice-to-have, it has become a key moral value and lends purpose to what we do. We don’t have to bang our chest and say, ‘hey look at us’, because the history of Banyan Tree is all about that.

Speaking of which, so many are shouting about sustainability today. What’s your take?

If being CSR-progressive was a competitive advantage and we relied on it to be so then we would’ve lost a lot of it because everybody is doing it now. But I don’t see it that way. People should compete on price, product quality and innovation, but not on being more socially responsible. It’s a matter of the more the merrier.

One of the biggest problems today is (stockbrokers, activists, etc) saying companies focus so much on CSR when they should focus on making profits for shareholders. But this is the old paradigm.

By changing one word – from shareholders to stakeholders – you can change the entire shape of the business. With this small change we can be talking about maximising returns for the five key stakeholders – employees, customers, suppliers, the general community as well as shareholders.

It’s a good starting point for every institution to have that important discussion as to who their stakeholders are and what relative importance to ascribe to each. Hopefully we’ll have a new generation of business people who would (champion this business mindset).

What are some, maybe unexpected, payoffs of starting the way you did that are just beginning to materialise?

I think the main payoff is an intangible one. And that is – with all things being equal – I’ve discovered consumers like to express their values through their purchasing power. If you believe in a particular cause and a company does great things for it, you’re likely going to buy (from them over a company that doesn’t). But that’s not to say you would be willing to accept sub-standard or over-expensive product simply because it supports your causes.

We pay out all our service charges even in China, where every hotel company has succumbed to the owners and gives service charge back to them. We do this because we believe that’s the social contract between us and the associates. And we get it back through better performance.

More people are recognising in a world that’s increasingly cynical about companies that those that do adhere to certain values tend to be longer lasting, and I hope that’s true because we’ll continue doing what we’re doing.

How do these values continue being a part of the company today?

(Referencing shareholder vs stakeholder decision-making) associates (as stakeholders) still rank higher for us than some other companies, because being a service company we have to ensure associates are highly motivated so they can deliver good service.

For companies in city environments (where the overall populace is affluent), community may not rate so high. But because we are in locations where people are usually not so well-off, for us the importance of local community would generally rank higher than for other (companies).

But of course our hotel in Shanghai, for example, would rank community lower than one in Tibet.

Speaking of China, a ranking of most popular hotels for Chinese high net worth individuals ranked Banyan Tree fourth, really remarkable when up against much bigger hotel chains. What’s behind this success in China?

We opened in Lijiang over 10 years ago and caught a wave. Prior to this all the brands in China were Western, and ideas of luxury were all Greco-Roman, Spanish revival, copies (of what you’d see) in the West. We came in right when the Chinese educated consumers were starting to have some sense of cultural pride. We intentionally (stayed away from) big cities where the brand would get lost, so we chose Lijiang and said let’s stake our claim here, create a beautiful product here and hopefully stand up above the noise.

It’s amazing how Chinese architects have come up so quickly, now our design is a dime a dozen – but when we first did it it was a breath of fresh air. I recall party secretaries in local counties would be rushing here to have a look because they wanted to attract resorts to the location.

What then does a partner like Vanke bring to the table?

They, like AccorHotels, would bring the major projects in big cities.

Normally we wouldn’t get in there, but Accor has so many owner-partners who are in all the big cities who already have got ibis, Mercure, Novotel, etc, and would now would like to do a great city hotel or urban resort with over 200 keys. Accor can’t give them a brand – the highest they got is Pullman, they bought over Fairmont but that’s for 500-600 keys, they bought over Raffles but that’s for heritage hotels. That’s when we are brought to the table.

Any new products can we look forward to?

There’s quite a lot in the pipeline with AccorHotels, and they will be announced all in a row pretty shortly. We are in the midst of intensive negotiations.

We’ll also (continue doing) smaller and more edgy hotels, bearing some aspect of the Banyan Tree brand. It has to be profitable but will focus not so much on dollar contribution to the company, but how it contributes to the brand too.