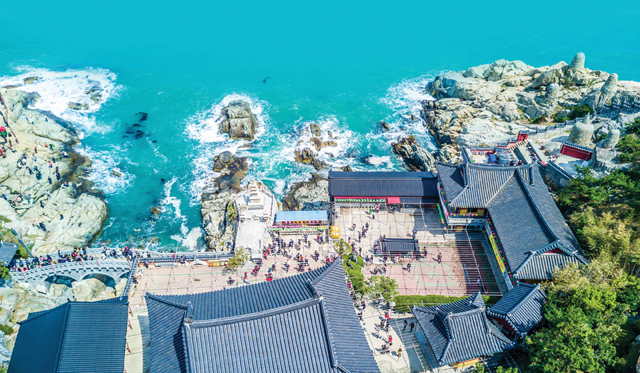 Julian Ryall takes a look at how the country’s largest port city makes a name for itself among international visitors by forging partnerships, launching campaigns and opening new attractions Like the rest of the country, Busan has benefited from the wave of South Korean movies and shows, with the latest blockbuster Train to Busan in part boosting the destination’s arrivals to 2.9 million in 2016, a strong rebound from 2.1 million in 2015, the year of the MERS outbreak.

However, the recent row between Seoul and Beijing over the deployment of THAAD anti-missile systems in South Korea threatens to derail arrival figures (see next page) this year as China has banned domestic travel agents from selling package tours to South Korea.

Looking to make up for the arrival shortfall, Busan Tourism Organization (BTO) is now seeking out new source markets beyond China and Japan.

Said Yoon Young-gi, assistant manager of BTO’s tourism marketing division: “Busan is quite well-known as a destination for FITs and we have high expectations that the inbound market from South-east Asia will grow.”

As well, 15 per cent of arrivals hail from outside Asia, another area that BTO intends to further tap into.

It has teamed up with Asiana Airlines since May to promote Busan to visitors from seven Asian cities – Manila, Singapore, Hanoi, Ho Chi Minh, Jakarta, New Delhi and Phnom Penh – offering free passes for sightseeing tours on bus.

“The campaign focuses on FITs from South-east Asian countries, and we are promoting it primarily online and through social media,” said Yoon.

Meanwhile, new infrastructure and hotel developments are expected to attract new travellers to the port city. The latest attraction is the Busan Air Cruise, a
glass-floored cable car that operates the 1.6km trip from Songdo Beach to Aman Park.

Arguably even more important are plans for a multi-billion-dollar project for a new airport on Busan’s outskirts. A feasibility study has been approved for the US$5.2 billion project that includes a 3,200m runway, new terminal, and associated facilities and infrastructure adjoining the existing Gimhae International Airport.

Once completed, the new airport will be able to handle 38 million passengers a year, a significant upgrade from the current 17.3 million. Work on the new airport is scheduled to start in 2021, with the facility operational in 2026.

Hilton Hotels and Resorts, similarly confident in Busan’s tourism potential, has opened its newest property in the city earlier this month.

“This is a key gateway city and the second-largest city in South Korea, which makes its an important destination for us,” said Jean Sebastien Kling, general manager of Hilton Busan and Hilton Namhae Golf & Spa Resort.

“South Koreans come here to enjoy the beach life and there are a lot of positive attributes to the city, although there is internationally still a lack of awareness about Busan and we hope to be able to help to change that,” he added.

“Busan is becoming the complete destination and I am confident that more international hotel brands will want to be here soon,” Kling remarked.