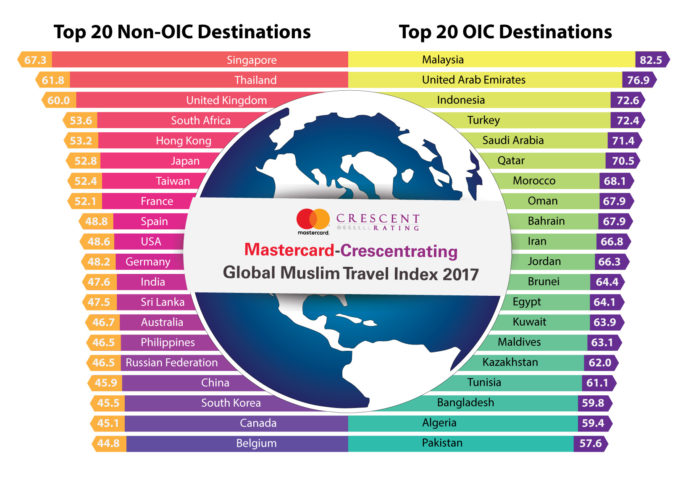 Malaysia and Singapore have topped the list of Organisation of Islamic Cooperation (OIC) and non-OIC markets respectively for the third consecutive year, according to the Mastercard-CrescentRating Global Muslim Travel Index (GMTI) 2017.

The GMTI, which covers 130 destinations, saw Malaysia keep its top spot while Indonesia moved up to third place in the overall rankings. On the combined overall list, Singapore remains the only non-OIC destination in top 10. A number of non-OIC destinations in Asia also moved up the rankings, a result of their concerted efforts to adapt their services to cater to and attract the Muslim travel market.

Indonesia, Japan and Taiwan made the biggest improvements in the overall top 10 ranking. Fazal Bahardeen, CEO of CrescentRating and HalalTrip, said: “We are definitely seeing the influence of a new breed of young travellers, millennials and Gen Z who are combining technology with a real desire to explore the world while still adhering to their faith-based needs. They will be the driving force for the next phase of growth.”

Safdar Khan, Mastercard’s division president, Indonesia, Malaysia & Brunei, added: “With an overall expenditure of around US$155 billion in 2016, the Muslim travel market remains a strong driver for the continued growth in travel across the world. It’s constantly evolving with major forces such as changing demographics and digitisation shaping the way the industry is progressing.”