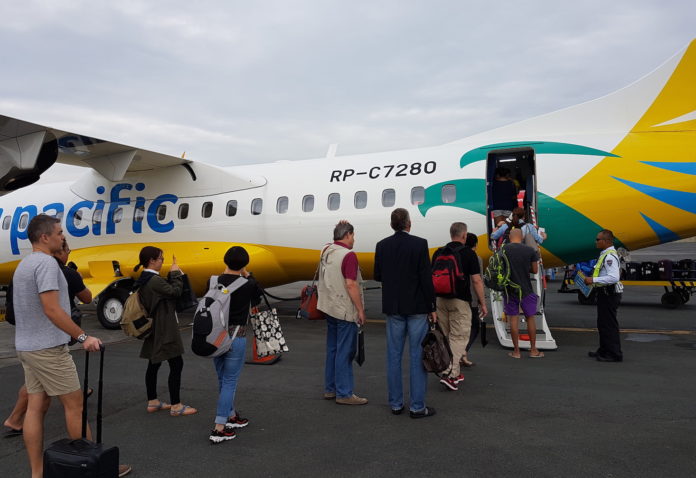 WHAT
After taking delivery of its first ATR 72-600 in mid-October, Cebu Pacific (CEB) has 15 more orders for delivery over the next four years. These ATR 72-600s will progressively replace its subsidiary Cebgo’s current fleet of eight ATR 72-500s, with an option to order 10 more.

Of the Philippines’ 100-plus airports, only 30 of them can accommodate bigger aircraft such as the Airbus. Smaller aircraft like the ATR 72-600 will enable Cebgo to grow its inter-island ambitions to serve emerging destinations like Marinduque, Roxas City, Calbayog, Ormoc and Masbate from its Cebu hub. WHY
The new turboprop’s value to Cebgo is apparent, but what about for passengers like me? The answer lies in its Armonia cabin.

The ATR 72-600 is the same size as the ATR 72-500 (which is configured at 72 seats), but has a bigger passenger capacity at 78 seats. The ATR 72-600 also boasts more efficient operations with 50 per cent less fuel consumption than bigger aircraft and a small size that enables it to land almost anywhere.

Seats in the ATR 72-600 are in the 2-2 configuration. I notice the seats are wider to offer more legroom and comfort. It is also interesting that the back of each seat has been tweaked so that the magazine rack now sits on top rather than at the bottom, which added legroom.

The overhead cabin is also 10 per cent larger, so passengers can stash their roller bags in the bin instead of checking them in, a feature especially welcomed for shorthaul flights to save time and hassle from waiting at the carousel for checked bags upon landing.

The ceiling is high enough for people over 1.8m in height to move around comfortably, although they have to bend to take their seats. But I do not see that as an issue for a shorthaul flight.

HOW
Cebgo’s 80-minute flight from Manila to Caticlan and return trip were both comfortable. The experience was no different to flying in a larger airplane, and I never once felt I was on a much smaller aircraft.

When I asked a companion, an aviation writer, on the noise level inside the aircraft, he said it was “pretty quiet”. Apparently, the ATR has reinforced the fuselage to reduce vibration from the engine and synced both the propellers so that it would be quieter and cause less vibration.

The ATR 72-600 is a time saver and extremely convenient. We landed in Caticlan Airport, located just a few minutes away from the jetty for the boat ride to Boracay Island. Had we flown in a bigger aircraft, we would have to land at Kalibo Airport and take another two-hour bus ride to the jetty.

VERDICT
Turboprops are sometimes associated with old aircraft and generally suffered a worse image in terms of comfort and noise. However, my experience onboard Cebgo’s Manila-Caticlan-Manila flight debunked all those misconceptions. I’ll be happy to fly in an ATR 72-600 again.