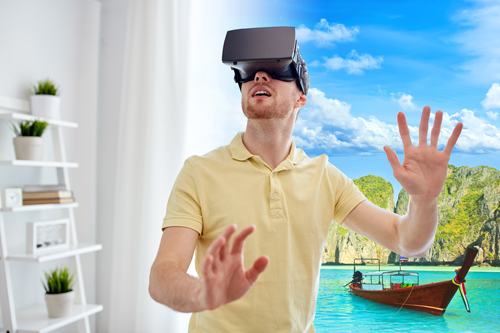 With virtual reality (VR) technology changing fast and devices like the Oculus Rift and Samsung VR Headset becoming commonplace, it is no wonder that the gaming, entertainment and medical training fields have been revolutionised.

The technology is also poised to transform travel. Many tourism players have begun offering VR as part of their business strategy, incorporating the technology as a regular sales and marketing tool to stir up interest and drive engagement with clients.

In October 2015, Shangri-La Hotels and Resorts was one of the first in the hospitality sector to deploy VR-enabled headsets at its global sales office, and has since expanded the VR availability worldwide and rolled out 360-degree video content for devices.

“Agents tell me that they like VR (as it helps them) get a better sense of the hotel. For example, if a hotel claims to be on the beach, it really helps them understand the reality of what that means, and they can better articulate it to their clients, enabling them to sell more,” said Sam McDiarmid, director of business development, agency sales, Shangri-La Hotels and Resorts.

As well, Tourism Australia has made good use of VR to make sights and sounds more palpable by incorporating the technology in its 2016 campaign. According to the NTO, VR helps as an inspirational tool to nudge potential travellers into making a booking decision.

Travel agencies have also embraced VR, with Flight Centre Singapore being the first in South-east Asia to do so in November 2015. The introduction of VR is part of the TMC’s plan to provide customers with an end-to-end travel experience that begins in-store, explained its marketing manager Liat Peled.

She said: “We are currently utilising VR to educate, excite and inspire customers to travel, sometimes to a destination they may never have considered before. The idea is to bring our customers closer to the decision making and booking stage, while assuring them of the destination.”

More recently, Carlson Rezidor Hotel Group unveiled the first phase of its VR offering in April this year. Besides seeking to build up its content base to cover all the hotel brands under its umbrella, the group also sees great potential in the corporate and MICE segment, for instance, by providing visualisations of a wedding set-up in their ballroom on VR.

Ariel Talbi, Asia-Pacific managing director of VR production company TaKanto Virtual Reality, whose clients include airlines, NTOs and agencies, opines that the tourism sector is seeing a proliferation of VR adopters due to its “natural fit”.

He said: “Travel and tourism have the greatest potential to leverage VR technology as an actual business tool. (For example), VR has introduced a new angle and a unique way to differentiate itself as an advertising platform by offering a sense of ‘presence’ that classic pictures or videos cannot do.”

But investing in VR on a business level is an expensive endeavour, a move that only larger companies can afford for now.

Like other VR adopters, Carlson Rezidor Hotel Group’s Asia-Pacific president, Thorsten Kirschke, hopes to get a “positive ROI” out of the company’s VR initiative, but acknowledges that can only be achieved in the long-term.

“(By using VR), we remain nimble and flexible in our drive to stay ahead of changing guest expectations and capture new audiences to ensure stronger returns for owners and investors,” said Kirschke.

“All signals are strongly indicative that VR is here to stay in the hospitality and travel market.”

This article was first published in TTG Asia September 2016 issue. To read more, please view our digital edition or click here to subscribe.