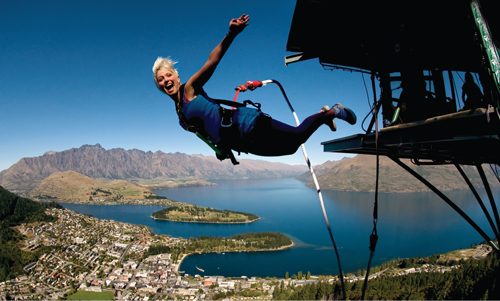 Asians are becoming daredevils, with more seeking out adrenaline-pumping activities in New Zealand Tourism New Zealand (TNZ) and travel suppliers are noting that Asian travellers are more adventurous than before, with a growing number of Indian and Chinese travellers opting for skydiving, bungy jumping and kayaking, while Malaysians, Singaporeans and Indonesians opting for cycling and softer activities like walking and trekking.

Said David Craig, general manager, Asia, TNZ: “The Chinese travellers are adventurous. They are going for everything. Not so long ago, many New Zealanders thought that the Chinese were quite happy to go on coach tours.

“Now they go skydiving, kayaking…they are very open to (new) experiences.”
Ann-Louise Riddell, head of marketing, NZONE Skydive Queestown, agreed: “About three years ago, we barely saw any Chinese doing skydiving; today it is our  third-biggest market after Australia and India.”

The company has also been embarking on its own promotions in China, in addition to TNZ’s efforts to bring Chinese celebrities to the country to skydive.

“Now, almost every week, we have (Chinese) couples (skydive) and make a marriage proposal,” Riddell added.

Traffic from the Indian market has also received a shot in the arm, with Bollywood artistes trying out the sport apart from accompanying the trade on sales missions in India.

“We have had extended families comprising parents, five to six-year-old kids and grandparents over 60 years old skydiving together,” she said.

While the two countries contributed around 3,000 travellers to the company last year, Riddell said Taiwan, Hong Kong and Singapore also contributed to the overall total of 5,000 Asians last year.

Similarly, AJ Hackett Bungy Queenstown saw significant growth of the Chinese market in the last couple of years after the company launched the Kawarau Zipride, a three-line flying fox.

“This is a softer version of the bungy jumping we created to attract more participants. It has turned out to be successful with the Asian market, especially the Chinese and the Indians, while we are also starting to see some Malaysians and Singaporeans,” said Regan Pearce, sales manager of AJ Hackett Bungy Queenstown.

Meanwhile, New Zealand has also been developing cycling trails around the country in the last three to four years to attract cycling enthusiasts around the globe.

Mischa Mannix-Opie, regional manager, South & South-east Asia, TNZ, said: “Cycling is one of the special interest activities people will travel for, and as part of New Zealand’s efforts to attract travellers, the government has injected some funds for developing cycling tracks around the country.”

According to Evan Freshwater, manager of New Zealand Cycle Trail Inc which manages and markets the cycle trails, some NZ$100 million (US$87.2 million) from fundraising efforts as well as public and private sectors were spent to develop and improve 23 trails around the country in the last few years.

While the major cycling market comes from the US and Europe, New Zealand is tapping Asia too.

Mannix-Opie said: “We have just had a travel (consultants’) fam trip with a focus on cycling and walking.”

One of the regions visited was Central Otago.

Pam Broadhead, marketing and product development manager, Central Otago, said: “We offer the 150km Central Otago Rail Trail following an old railway line from Middlemarch to Clyde, which was turned into a cycling or walking trail 20 years ago.”

With the trail taking between three and five days to finish, Broadhead added: “This is an easy trail. Most of our clients are over 40 years old and families on holiday. Along the way, they can enjoy the local food, taste the local wine and stay in various accommodations.”

“The experience is different, starting with an easy bicycle ride of 10km, followed by a jetboat ride for another 10km, before cycling to the end of the trail,” Broadhead explained.
The 73km Clutha Gold Trail from Lake Roxburgh Dam to Lawrence, on the other hand, offers a heritage experience showcasing the area’s history of early Maori moa hunters, Chinese gold miners, European pastoral farming, mining and rail.

TNZ’s Mannix-Opie said that the NTO would continue to work with the trade to develop more adventure travel itineraries. “Next year we will look at paid marketing and advertising space in special interest publications,” she added.

This article was first published in TTG Asia, July 11, 2014 issue, on page 12. To read more, please view our digital edition or click here to subscribe.