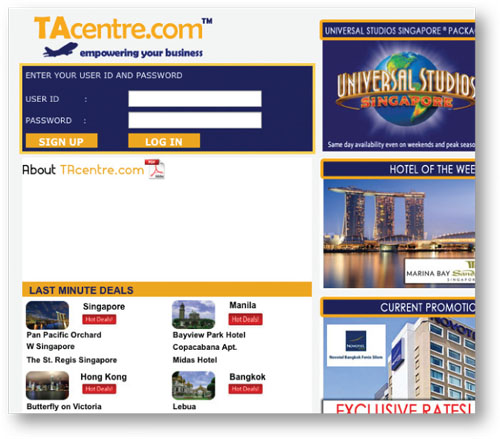 An expansion of B2B players in Asia is making the wholesale market more wholesome, providing OTAs and brick-and-mortars greater service, product, availability and pricing than ever before. Raini Hamdi and Gracia Chiang take a look at the competitive strategies of four such players TAcentre
WHO Owned by Asiatravel.com Holdings Singapore, a pioneer in B2C in Asia and the only public-listed travel agency on the Singapore Stock Exchange.

PLANS Launched recently in Singapore, the Philippines and Hong Kong, TAcentre will be rolled out to Malaysia, Indonesia and China next. Plans are afoot to offer local language versions in-market and to offer agencies white-label marketing later on.

USP/INVENTORY TAcentre bills itself as Asia’s first online wholesale system that offers not just hotels but FHTs (flight/hotel/tours) that can be booked with instant confirmation. TAcentre banks on “best rates” and “widest inventory”, thanks to 17 years of local presence throughout Asia that helps it seal “real” relationships with suppliers, said vice president marketing Fred Seow. The inventory now comprises 100,000 products (including packages, hotels, flights and tours) and the aim is to boost this to one million products by 2013. There are 44 FHT packages for Singapore to Hong Kong alone. Consultants can also buy tickets to popular theme parks in Asia directly on TAcentre, with the barcoded vouchers serving as tickets.

THUMBS UP Agencies see the instant confirmation promise as its greatest advantage. They also give the inventory,  convenience, service and flexibility the thumbs up. Plus, it’s free to use.

FEEDBACK Some agencies were concerned about clients’ data confidentiality. As well, “instant confirmation” still depends on availability, they pointed out. Addressing the former concern, Seow said: “Transactions and communication on TAcentre.com are between the travel agency and TAcentre.com strictly. E-tickets and vouchers are emailed to the travel agency and not their customers…protecting the integrity of the wholesale system is of utmost importance, or else TAcentre will not be sustainable in the marketplace.” Hotelbeds
WHO Part of the Accommodation & Destinations Sector of TUI Travel, Hotelbeds is now in its 10th year of operations as accommodation provider.

It aims to increase its workforce in MEAPAC by 25 per cent by 2015, from 750 employees and 21 offices throughout the region now.

USP/INVENTORY An online accommodation database of over 45,000 hotels from over 1,500 hotel chains and independent hotels in 147 countries.

“We invest in people, IT platforms and distribution channels. This is why we have been able to outperform the market with double-digit growths every year since the last 10 years.

“There may be more competition now in the region, but our core strengths and our continued investment will ensure we achieve our targeted growth of 40 per cent by 2015. With 21 offices now, you can imagine how this gives us more opportunities to have preferential rates and treatment with key partners,” said Pablo Aycart, MEAPAC managing director.

He also revealed that Hotelbeds was starting to develop special services such as ticketing and excursions for Real Madrid and Barcelona team matches. In Europe, the trade can already buy such inventory with Hotelbeds, and Aycart expects that within 12 months, agencies worldwide would also be able to do so. JacTravel
WHO An independent, privately-owned company based in the UK specialising in providing hotels online and inbound services to the travel trade.

JacTravel has local operations in London, Edinburgh, Vancouver, Dubai, Barcelona, Paris, Prague, Rome and Sao Paulo. Last year, it claims to have handled operations for more than 3,000 groups and 1.5 million FIT passengers on behalf of its trade partners.

PLANS With a growing client base in Asia and the growth potential of Asia, JacTravel aims to open an office in the region by the end of the year, employing people with local knowledge. It recently appointed a head of sales for South-east Asia, Ali Jones. She will be selling JacTravel’s B2B booking system and XML links to its hotel inventory, which the trade can access on a net rate basis.

Since expanding to Asia in 2009, sales in the region have increased 319 per cent to £8.3 million (US$13.3 million), with over 20 new clients. Inventory has grown to over 350 directly contracted hotels in Asia in the past three years.

USP/INVENTORY It “handpicks” its own hotels rather contracting all hotels. Said CEO Mario Bodini: “These are boutique, independent hotels in a wide range of categories and styles, with large allocations on short releases and the best deals.  JacTravel’s API/XML system is one of the best in the industry, being fast and reliable.”

Its inventory includes over 10,000 properties in more than 550 cities.

Aside from zeroing in on boutique, independent hotels, Bodini said excellent customer service, and rigorous health and safety criteria for its hotels, were “potent differentiators” in the B2B market.

“The strategy is listening to clients and trying to ensure we have all the hotels that they require with great availability and at great prices.

“The market is tough – with lots of barriers for new players such as having the technology, working capital and the correct product range,” said Bodini. AdventureLink
WHO US-based adventure travel aggregator AdventureLink was established in 2006. Ninety per cent of its business is from B2B partners, which includes OTAs, leisure travel agencies and even consumer publications that want to feature adventure travel products. The company recently established a partnership with Orbitz and is in talks with Travelport to distribute its content.

PLANS Wants to enter the Asian market with a new agent interface that will be launched in the region next year, offering access to around 12,000 trips across 130 countries. It is seeking distribution partners who will allow it to gain access to the agency community in Asia, with markets of interest being Thailand, Singapore and Japan.

USP/INVENTORY Calling it the “largest system in the world for booking adventure travel”, founder and CEO, Kelly Tompkins, said his “well-rounded” inventory consists of land packages ranging from African safaris to cycling wine tours in France, contracted with major tour operators such as G Adventures and Intrepid Travel, as well as family-run boutique outfits. Air content will also be available soon, with at least one airline already onboard.

Tompkins said: “The adventure travel market is estimated to be growing at 17 per cent a year by the Adventure Travel Trade Association. That’s higher growth than most other travel products.

“This is a US$89 billion market, and it’s being fuelled by ageing baby boomers who are looking for these types of experiential travel opportunities. However, (the market is) very fragmented…so we’re trying to put all the information into one place.”

THUMBS UP Dangling commissions of 10-15 per cent, Tompkins said: “It’s the largest commission opportunity available today. Our average booking is US$5,000…We’re proponents of (travel consultants), and we’re giving them the tool set to become specialists in adventure travel.”