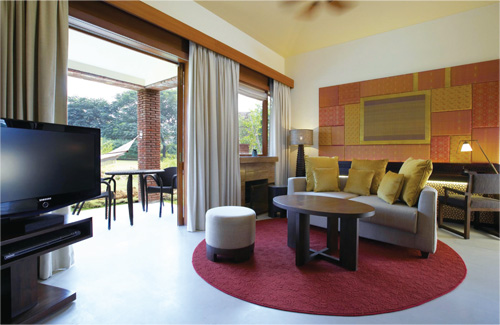 In operation Starwood currently operates 33 hotels in India. The Luxury Collection is the largest Starwood brand in India, which is also the brand’s second-largest market after the US.

Under development There are over 20 hotels under development in India, all scheduled to open by 2015. In 2012, Starwood will open the ITC Grand Chola, Chennai, a Luxury Collection hotel; Westin Chennai; and two Aloft hotels. W Hotels (Mumbai, Goa, Delhi NCR) and St. Regis (Delhi NCR) will be introduced to the market in 2015 and 2016 respectively.

Investment Mostly management contracts. It has also franchised a part of its Luxury Collection to ITC Hotels such as ITC Maurya and ITC Grand Central.

Adapting to the market To meet the demand generated by the increasing number of Indian customers, Starwood opened its first Customer Contact Centre (CCC) for the market in Gurgaon earlier this year. This is Starwood’s ninth global CCC and its fourth in Asia-Pacific.

Comment “Indian consumers continue to enjoy double-digit growth in per capita income, while the population of high net-worth individuals has grown over 80 per cent in the last five years…We have a significant opportunity to grow our luxury brands.” – Dilip Puri, managing director of India and regional vice president of South Asia The Leela Palaces, Hotels and Resorts

Who The Leela is a luxury hotel group with properties across India, including palace hotels in several cities. The chain exemplifies Indian hospitality and international standards of service excellence.

In operation The Leela has seven operating hotels throughout the country.

Under development Its eighth hotel is due to open in Chennai in March, while a ninth will open in Jaipur by year-end.

Investment Although the majority of its properties are built and owned, the group is now pursuing an asset-light strategy. Most of its hotels opening over the next few years will operate under management contracts.

Adapting to the market Indian business travellers need a more elaborate and efficient room service/in-room dining menu. For leisure, Indians take quicker and more frequent breaks; look for family and couple accommodation with more hotel activities; and have a lesser need for sightseeing. They sleep late, get up late, want to have late dinners and enjoy an overdose of service.

Comment “I am very bullish about the Indian hospitality industry as we have just scratched the surface. The government now understands the employment potential of this industry, and this is resulting in measures that will impact investment and make it easier for foreign nationals to visit India.” – Sanjoy Pasricha, vice president, sales and marketing Who Accor is present in 90 countries with 4,200 hotels. Its broad portfolio of hotel brands include Sofitel, Pullman, MGallery, Novotel and Ibis, providing an extensive offer from luxury to budget.

In operation Accor has 10 hotels in India.

Under development Accor’s luxury brand debuted in India last year with the Sofitel Mumbai BKC. There are two more Sofitels committed for India. Accor has also reaffirmed plans to open around a dozen more hotels in India by the end of 2012 – double its current number – and remains on track to have 90 properties in the market by 2015.

Investment A mixture of owned and managed hotels.

Adapting to the market Guest services and F&B are designed with an accent on Indian travellers’ needs such as a suitable buffet spread, relevant TV channels and multilingual reception staff.

Comment “Accor is focused on India as a core growth market…While we are placing a significant emphasis on the mid- and economy sectors, we are also expanding in the upscale segments.” – Michael Issenberg, chairman and chief operating officer, Accor Asia-Pacific Who CGH Earth develops and operates properties in India, with a strong focus on nature and the environment. A family-owned enterprise, CGH defines its properties as luxurious – both in comfort and experiences.

Under development There are plans for properties in the Andaman Islands, Puducherry and North Karnataka. CGH Earth’s properties will increasingly have fewer rooms, offering customised experiences for guests.

Investment All properties are owned and managed.

Adapting to the market Guests engage with the destination and the local communities. They are served fresh produce cooked in local flavours and styles. Core values such as sustainability and community involvement are promoted.

Comment “Our customer is the ‘alert independent traveller’. He is on a voyage of discovery, and luxury is determined by the quality of his experience rather than ostentatious buildings. We expect growth to be much larger than our available capacity.” – Jose Dominic, managing director

This article was first published in TTG Asia, February 24 issue, on page 8. To read more, please view our digital edition or click here to subscribe.