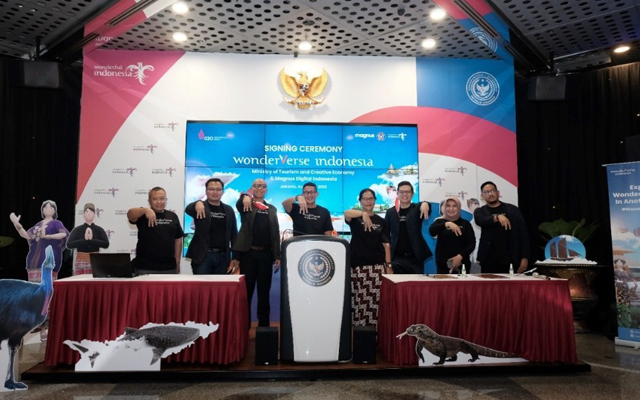 Indonesia’s Ministry of Tourism and Creative Economy and Magnus Digital Indonesia, an ad-tech marketing consultant and part of the Volare Advertising Network, have developed a metaverse channel to promote Indonesia’s offerings.

WonderVerse Indonesia aims to promote the beauty and uniqueness of Indonesia to the rest of the world as well as to encourage tourism and creative economy players to promote their products digitally.

Minister of tourism and creative economy, Sandiaga Uno, said: “We are currently in a transitioning period where digitalisation becomes the driving force behind transformation and new platforms that will boost tourism promotion. We are finding ways to accelerate technology development as metaverse is a place where we can conduct activities interactively.”

WonderVerse Indonesia is divided into four parts called “lands”, with more lands to be added in the future.

The Lobby is where visitors can interact with endemic animals, and enjoy digital galleries containing works by Indonesian artists, and a wide screen showcasing a variety of upcoming excitements. WonderFun Land showcases traditional games, performances and entertainment; WonderGoods Land is an online marketplace; while WonderReal Land allows visitors to directly purchase flight tickets, hotels, and accommodation in the top five destinations they want to go to for their holiday.

“WonderVerse Indonesia can become a (source) of information and provide great benefits for Indonesia in terms of digital, travel, and the creative economy,” opined Hendra Liman, CEO, Magnus Digital Indonesia.

WonderVerse Indonesia is accessible from anywhere through its desktop site, with future plans for virtual reality (VR), creating opportunities for the tourism industry and the creative economy to reach the younger generation.