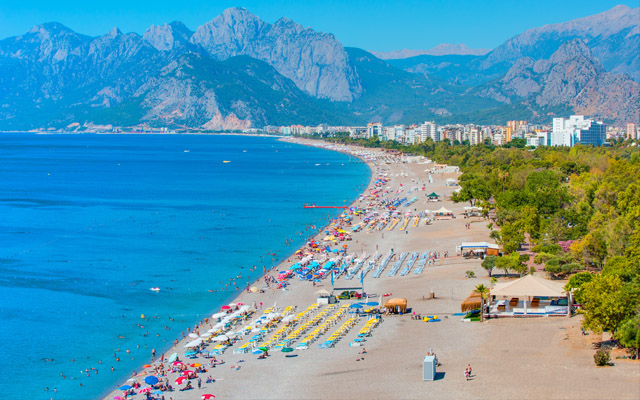 The World Travel Market (WTM) report by ForwardKeys reveals that in the third quarter of the year, global air travel is set to reach 65% of where it was before the pandemic in 2019, with some parts of the world doing much better than others. It also shows beach holidays as a more popular choice compared to urban city visits and sightseeing.

Africa and the Middle East have been deemed to recover most strongly, with arrivals in 3Q expected to reach 83% of 2019 levels, followed by the Americas, where summer arrivals are expected to reach 76%, and then by Europe, 71%, and Asia-Pacific, just 35%.

The current preference for beach holidays is illustrated by a comparison of the top ten beach and urban destinations in Europe, ranked by 3Q flight bookings compared to 2019. All those on the beach list – led by Antalya, 81% ahead; Tirana, 36% ahead; and Mikonos, 29% ahead – are showing extremely healthy demand, whereas, in the urban list, only Naples is ahead. Furthermore, the four leading urban destinations – Naples, 5% ahead; Istanbul, flat; Athens, 5% behind; and Lisbon, 8% behind – are all also gateways to beach resorts too.

A similar trend is exhibited in the Americas, where 3Q bookings for air travel to the Caribbean, Central America and Mexico are 5% ahead of 2019 levels, whereas flight bookings to South America and to the US and Canada are 25% and 31% behind respectively. The destinations set to perform most strongly are Costa Rica, 24% ahead; Jamaica, 17% ahead; and the Dominican Republic, 13% ahead.

Enthusiasm to travel again internationally is so strong that a rise in air fares has done relatively little to dampen demand. For example, the average fare from the US to Europe climbed by over 35% between January and May with no noticeable slowing in booking rates – these fares were nearly 60% above the previous year.

Fares for shorter haul, intraregional travel – within the Americas – also increased substantially by 47%, which is less than for longhaul. However, the demand for those tickets peaked in March.

Helpfully for the travel industry and for many destinations, American travellers are planning to stay longer and spend more than they did in 2019 but not as much as they did during the pandemic. The average planned length of stay in 3Q is 12 days, up from 11 days in 2019. Last year, it was 16 days, but fewer people with a more affluent profile were travelling then. The proportion of people flying in premium cabin classes in 3Q is also set to rise, from 12% in 2019 to 15% this year (although, it reached 19% in 2021).

The relatively promising outlook for summer travel to Africa and the Middle East is due to a combination of factors: several Middle Eastern airports act as hubs for travel between Asia-Pacific and Europe, which has led to the Middle East benefitting from the revival of intercontinental travel, particularly driven by people returning to Asian countries to visit friends and relatives.

The closure of Russian airspace has also contributed to the uplift in hub traffic. Cairo, 23% ahead, has increased connectivity to European markets. Nigeria, 14% ahead; Ghana, 8% ahead; and Ivory Coast, 1% ahead, with large diasporas in Europe and the US, are seeing expats return to visit friends and family. Tanzania, 3% ahead; Cape Verde, flat; and the Seychelles, just 2% behind, are successfully attracting longhaul visitors from Europe.

Travel to and within the Asia-Pacific region is recovering more slowly, owing to stiffer Covid-19 travel restrictions remaining in force for longer.

Olivier Ponti, VP Insights, ForwardKeys, said: “With 2022 seeing travel restrictions lifted, connectivity re-established, and consumer confidence regained, demand for international travel is on the rise once more, marking a departure from the domestic travel trend that dominated in recent years. In 3Q this year, holidaymakers are relatively much keener to leave the pandemic behind with a relaxing break on the beach than they are to consume culture, cities, and sightseeing.”