There is now an opportunity in Singapore to get an up close and personal look at the quirky prized possessions of the late American chef, food writer and TV host, plus explore and dine at a charming and eclectic restaurant 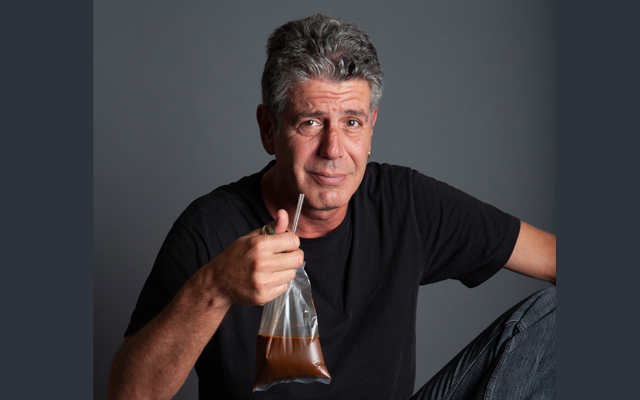 Why
The secret is out! The late Anthony Bourdain’s Bob Kramer custom steel and meteorite chef knife, which sold for over US$231,250 in a 2019 auction of his personal belongings, has been revealed to have been acquired by The English House by Marco Pierre White in Singapore.

For some time, no one knew the identity of the lucky buyer. But here I was at the restaurant, fortunate enough to be peering closely at the renowned bladesmith’s bespoke culinary tool.

During a recent media preview to pay tribute to the life and legacy of Bourdain, I was one of the first few to lay eyes on the exquisite collection of art and personal possessions of the celebrated chef, unveiled at The English House.

For the very first time in Singapore, the beloved collection is now available for public viewing exclusively at the legendary British chef-restaurateur’s establishment.

What
Displayed lovingly across the antiquated interiors of The English House, diners can discover Bourdain’s trove of cherished personal mementos, art and cultural artefacts collected during his exciting travels around the globe.

Apart from the Bob Kramer creation, the 150-seater restaurant is also home to other gems such as a chrome duck press the late chef became enamoured of during the Paris episode of The Layover; a French silvered bronze Michelin Man sculpture; a bronze skull and antler sculpture from long-time friend, White; an African carved wood and metal ritual power figure, Nkisi Nkondi, from the Portuguese colonial era which was gifted by a Mbole tribal chief; a pig chef sculpture; and intriguing works by contemporary artists Ralph Steadman and Brad Phillips.

Each item curated in the collection held special significance for Bourdain, either as gifts from friends or cherished buys picked up during his travels, creating and inspiring many on television.

Said The English House’s spokesperson, Chef Gabriel Fratini: “Anthony Bourdain was a renegade in the culinary, travel and entertainment worlds, and his experiences led him to amass a truly impressive collection of art – one that represents his eclectic taste, appreciation for discovery and, most notably, other cultures.”

I was most fascinated by the darkly hilarious works of English illustrator Ralph Steadman, especially the gritty silkscreen piece, Rats in the Kitchen, inscribed to Bourdain.

Deeply insightful with a mischievous dash of dark wit, the morbid depictions of an alcoholic cook and a dissected rat underline its droll commentary on kitchen life reflected by the themes Bourdain explored in Kitchen Confidential, his best-selling memoir.

Besides, I was also in for another delightful treat at the event, being seated at the same table as celebrity photographer, Russel Wong.

Over lunch, Wong shared engaging work tales of his collaborations with Bourdain when he was in Singapore – Wong once deployed a kitchen distributor venue in Bukit Merah as the set for Bourdain’s publicity shots for No Reservations and brought the late chef to savour roti prata at Jalan Kayu and other local favourites at hawker centres.

Bourdain was down-to-earth, had a reserved demeanour, was always respectful and had a deep knowledge of the cultures of others, according to Wong.

The English House, nestled at Mohamed Sultan Road among a row of Singaporean conservation shophouses, is itself, a wonderous labyrinth decorated in vintage collectibles, impressive art, celebrity and movie memorabilia, as well as other novelty exhibits.

The unique interior and decor, which marry the best of Straits Chinese and classic 19th century Singapore shophouse design, were created as White’s passion project and pay homage to his love for culture.

The art collection will be a permanent fixture at The English House and is only available for viewing to diners.