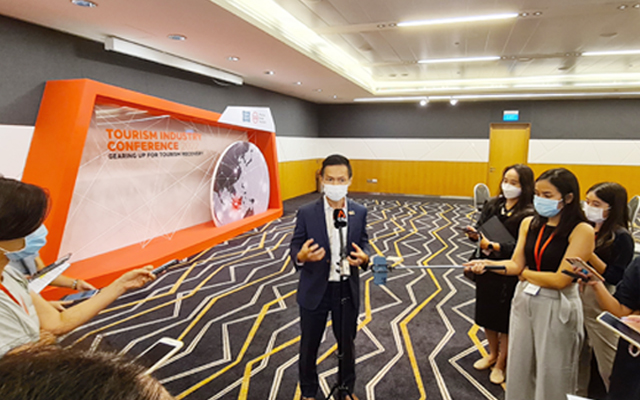 Singapore recorded 57,000 short-term visitors in January, 67,000 in February and 120,000 in March, outstripping long-term pass holders, even before the city-state enforced simplified border measures that came into effect on April 1.

“We only resumed the Vaccinated Travel Lanes in February, and in March we announced further border relaxations. As such, I expect to see a very strong April,” Tan added.

However, Tan has refrained from providing updates on STB’s tourism forecast for 2022. He would only say that STB was working with the Ministry of Transport and Changi Airport to “get a greater sensing of where demand would come”.

“At the very least, I am quite confident to say we are better than last year,” he remarked.

For the whole of 2021, Singapore welcomed 330,000 international visitors who contributed S$1.9 billion (US$1.4 billion) in tourism receipts.

As international visitors return to Singapore, Tan hopes they would see that the destination has invested the past two years on refreshing existing products and bringing in new experiences.

“We have not been static. There are destinations where many attractions and businesses had shut down (during the pandemic). In Singapore, we’ve worked hard at retaining a certain (number of) attractions and experiences, so that we are ready for this point in time.”

While most of Singapore’s Covid-safe measures have eased off, Tan said mandatory mask-wearing has been retained to keep people safe.

“I hope that visitors will recognise that this gives them a higher level of assurance, and is not an inconvenience,” he said.

“We are very thankful that over the last two years when borders were largely closed, we enjoyed a lot of support from our local audience. The domestic market will remain a segment that we want to pursue. The local audience will form a very meaningful base load for many of our events, including the wellness offerings that we are making a very concerted push for,” he emphasised.

The wellness offering refers to the inaugural Wellness Festival Singapore that will launch this June. Aimed at enhancing Singapore’s wellness offerings and catalyse more wellness-related products and partnerships between various players in the destinations, some of the known activities include a multi-sensory pop-up at Gardens by the Bay alongside wellness masterclasses; an inaugural Livewell Festival at Sentosa; and a series of art, wellness and mindfulness programmes at National Gallery of Singapore.

More activities under the Wellness Festival Singapore will be announced in time to come.

Yap added: “We will continue to create products that will resonate with the local audience, not just the international audience.

“I think there is an artificial divide between international and domestic tourism. Many of the lifestyle offerings in Singapore appeal to the general human nature, which seeks social connections. Any experience that caters to the international audience will also appeal to the locals.”