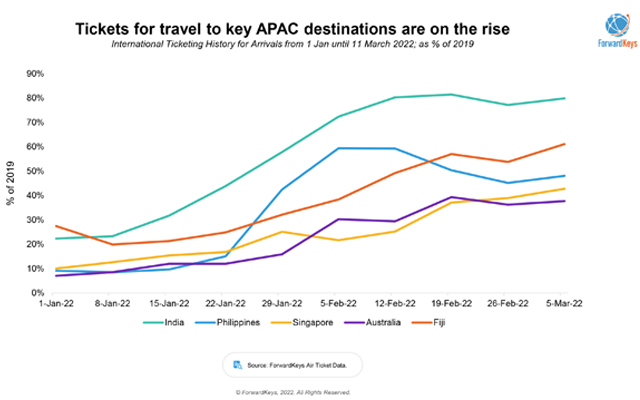 Travel intelligence company ForwardKeys is seeing a growing number of flight tickets issued for travel to key Asia-Pacific destinations as more nations in the region reopen for travel and scrap challenging travel barriers such as quarantines and the number of PCR tests.

India is leading the way forward in terms of inbound issued tickets, with numbers rising to 80 per cent of 2019’s level in the week of March 5, 2022. “The success behind India’s reactivation is the fact that India had announced in advance her reopening plan for this year, generating awareness and interest. Fiji is a leisure island destination and I think that is her main advantage during this recovery phase, as people may feel safer to travel to less crowded places (compared to cities) with a variety of outdoor activities,” said Nan Dai, market analyst at ForwardKeys.

For example, travel from Australia to India has improved 16 per cent against 2019. Pick-up in tickets from Australia to India started to emerge at the beginning of February when India removed the requirement for quarantine, facilitated travel by adding more countries to its Category A country list, which Australia was part of, and allowed entry with proof of vaccination.

Fiji is also seeing an uplift in future bookings from Australia, peaking and performing above 2019 levels in April, June and September.

However, Dai stressed the need to avoid relying on typical travellers of the past. “Our data shows that this Southern Hemisphere summer, it’s couples and groups of more than six who are most likely to travel to Fiji, not families or solo travellers.”

In concluding her Asia-Pacific analysis, Dai urged government bodies and destinations to rely on real-time trends and data to guide their reopening strategy. She stated that Mexico, Greece and the UK have shown that restarting travel “safely and healthily” is possible when decisions are led by data and when “clear travel rules that don’t get changed frequently”.

“For example, in Singapore, the leisure market is showing more resilience than in 2019 and there have been (improvement) in issued tickets from Thailand (12 per cent) and Denmark (9 per cent) to Singapore – these are new and exciting opportunities worth exploiting via new flight frequencies or marketing campaigns for the tourism boards,” she added.

In the instance of Australia, while total inbound traveller numbers may be low for now, ForwardKeys data reveals a 14 percentage point growth in premium cabin class arrivals in 2022 versus 2019. According to Dai, this signals an opportunity for Australia to target affluent travellers.