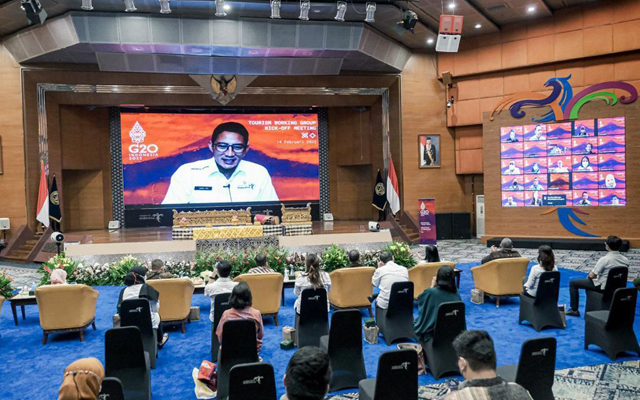 Leader of Indonesia’s Ministry of Tourism and Creative Economy (MoTCE), Sandiaga Uno, has called on members of the G20 countries to work towards post-lockdown recovery in the tourism and creative economy sectors.

Speaking at the opening of the G20 Tourism Working Group (TWG) in Jakarta, Sandiaga highlighted G20’s Recover Together, Recover Stronger theme, stating that it was important to strengthen the tourism and economic sectors collectively, and make sure no one country is left behind.

He expects that G20 TWG will be able to develop a concrete solution based on best practices, which can be agreed upon by all members. Under the Indonesian presidency, G20 TWG has chosen to focus on the revival of the tourism sectors by promoting resilience.

TWG has identified strengthening the community as one of the key efforts in transforming the tourism sector.

“As such, G20 TWG will focus on empowering communities through the further development of SMEs and Community Based Tourism, and develop tourism villages, creative villages and programmes,” Sandiaga elaborated.

He added that support from other G20 member countries, World Tourism Organization, and private stakeholders were very much welcome.

Coordinating minister for the economy, Airliangga Hartarto, also voiced his hope that Indonesia’s G20 presidency would help to kickstart the revival of tourism and business events in the country.

“With 400 events set to take place in 25 cities across the country (this year), I expect MoTCE to become the engine that will drive the recovery of the tourism and MICE sectors,” Airliangga stated, adding that the sectors would contribute some 7.4 trillion Indonesian rupiah (US$517.5 million) to the country’s GDP, and generate 33,000 jobs.

“The G20 theme of Recover Together, Recover Stronger is in line with the UN spirit. The UN is ready to coordinate and collaborate in all levels,” he stated.

To discuss tourism recovery initiatives further, MoTCE as the leader of the TWG, has planned a series of meetings later this year. The NTO meeting will take place from May 10-11 in Labuan Bajo in a hybrid format, followed by an in-person meeting in Bali on September 23, and finally, a ministerial-level meeting on September 26.