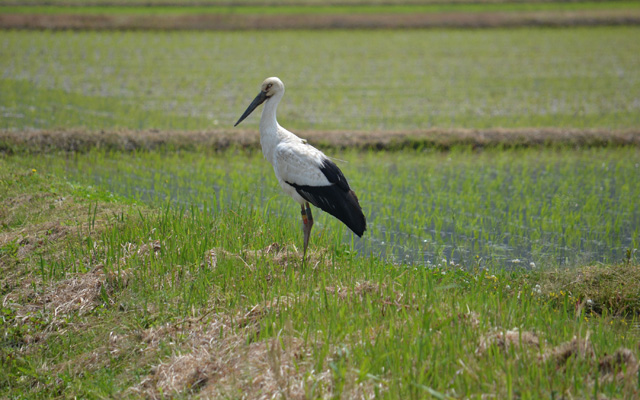 A hot spring town in rural Japan is eyeing an uptick in eco-tourism due to the success of environmental initiatives to re-wild a rare breed of oriental white stork.

Kinosaki in Toyooka City, Hyogo Prefecture, has restored its population of oriental white stork since work to save the endangered species started in the 1960s. Then, oriental white storks were only present in a handful of regions including Toyooka. Today, about 140 of the birds fly in the skies above Toyooka and live in the city’s organic rice paddies, wetlands and biotopes.

Efforts to revive the oriental white stork population have increased the diversity and number of many other species in Toyooka, giving the city a further boost as a green destination. The city is now home to 280 bird species as well as hundreds of kinds of other wildlife. The city supports 45 per cent of the total 633 species found in Japan.

Along the way, Kinosaki has developed a raft of stork-related tours, facilities and souvenirs. With the opening up of travel in 2022, the town, near Kyoto, hopes to attract visitors who are interested in nature, wildlife and the environment or who simply want to spend time in an environmentally friendly and sustainable destination.

A five-hour tour of the Toshima Hachigoro Wetlands, which was launched in late 2019, aims to introduce revived habitats and the diverse wildlife they support such as insects, fish, frogs and snakes. Visitors can travel through lush wetlands, including rice paddies converted into wetland, which have been registered under the Ramsar Convention. Guides will point out the wildlife and efforts by local stakeholders to create an optimal environment for the storks. These efforts include developing shallows along riverbeds, transforming unused rice fields into biotopes and fostering corridors to connect key wetlands for the birds’ easy movement. Following a viewing of agricultural sites, visitors are served a lunch featuring organic vegetables and Stork Natural Rice, a local brand grown without chemicals.

The tour will be held in full for the first time from April 1 to November 30, 2022. It is aimed at the FIT, group tour and corporate markets, including incentive travel and teambuilding segments. It is expected to generate awareness of Toyooka as a destination for bird lovers and environmentally conscious travellers, as well as draw greater numbers of visitors to Toyooka’s other wildlife-related tourism offerings.

Jade Nunez, coordinator of international relations at Toyooka Tourism Innovation, said by the end of March 2019, five million people had visited the city’s Stork Museum since its opening in 2006, the year after the storks were released back into the wild by members of the Imperial Family in a prestigious ceremony. A Stork Tourism Guide has also been produced to offer information, advice and tips for visitors to make the most of their stay.

With the rise in popularity of outdoor and off-the-beaten track tourism offerings due to demand for social distancing, and growing awareness in Japan of the need to support activities that contribute to the United Nations’ Sustainable Development Goals, Toyooka’s tourism stakeholders are poised for rapid growth. Their hopes have been buoyed by the city’s listing in the 2021 Top 100 Destination Sustainability Stories, a global initiative by the Netherlands-based organisation Green Destinations.

“This recognition is definitely helping us to raise awareness of Kinosaki as an eco-tourism destination,” said Nunez.