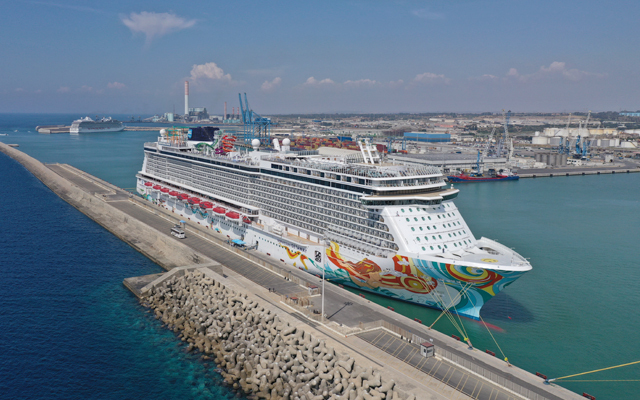 Norwegian Epic and Norwegian Getaway have been deployed once again in the Mediterranean as Norwegian Cruise Line (NCL) returns to cruising in a post-lockdown world.

A third of NCL’s fleet of 17 ships are now back in operation.

Following an extensive refurbishment at the end of 2020, Norwegian Epic returns to sailing with an all-new The Haven by Norwegian, featuring 75 upgraded suites combined with redesigned experiences, including The Haven Restaurant and The Haven Courtyard Pool and Sundeck. Her first voyage took passengers to popular ports in Spain and Italy from Barcelona over seven days.

Meanwhile, Norwegian Getaway embarks on her first voyage from Rome (Civitavecchia). Through October 25, she will sail a mix of 10- to 11-day Greek Isles itineraries, calling to Dubrovnik, Corfu, Katakolon – NCL’s newest embarkation port located on the Peloponnese peninsula – as well as Santorini, Mykonos, Naples and Livorno (Florence/Pisa). With up to 13 hours in each port and no more than two days at sea, guests will have more time exploring the destination.

Representatives of the ports in Barcelona and Civitavecchia welcome the return of cruise tourism.

Pino Musolino, president and chief executive officer of Port System Authority of the Central Northern Tyrrhenian Sea, said: “The cruise industry is an important cornerstone for our country and region, contributing more than 400 million euros (US$473 million) annually to the economy of the territory of Civitavecchia alone, and providing for more than 1,800 jobs. As such, we couldn’t be more excited to welcome back both NCL’s crew and guests, and look forward to working closely with the team once again.”

Jose Alberto Carbonell, managing director of the Port de Barcelona, said in a statement that efforts have been made to “ensure a safe resumption of cruising from Barcelona for guests, crew and the citizens of our city”.

“We’re thrilled to welcome NCL back to the Port de Barcelona”, said Jose Alberto Carbonell, managing director of the Port de Barcelona. “During the past 18 months, we’ve worked diligently with the NCL team to ensure a safe resumption of cruising from Barcelona for guests, crew and the citizens of our city. We are glad to finally celebrate the comeback of cruising together.”

NCL’s fleetwide redeployment will continue in partnership with local governments and are guided by the robust protocols of the line’s SailSAFE health and safety programme, which at its cornerstone includes that all crew and guests must be fully vaccinated to embark on voyages through December 31, 2021.