New Clark City and the province of Bohol are making strides in establishing the Philippines as a preferred tourist destination, while pushing for sustainable and responsible tourism development. 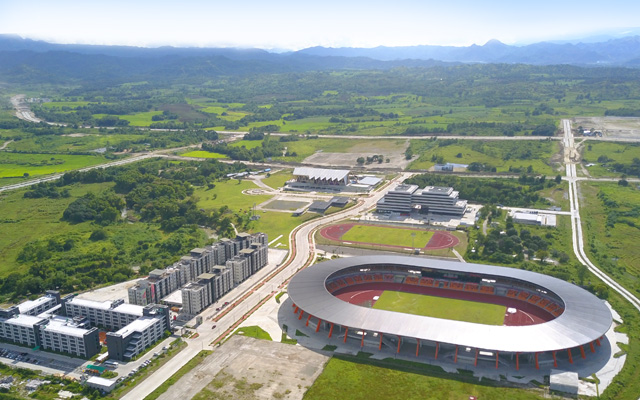 One is a high-tech smart city in the making, the other teeming with rustic, laidback charm. One is the next international commercial hub with an emerging tourism zone, the other, primarily a leisure destination that is also primed to host business events. Despite their differences, the New Clark City and the province of Bohol share the same goals for a sustainable and responsible tourism development.

New Clark City
Just a few hours’ drive from metro Manila, the New Clark City (NCC) in Tarlac raises the bar for a carefully master planned development that strikes the right balance between innovation and sustainability.

Twice the size of Manhattan, only 40 per cent of the land area of the futuristic mega-project is being developed, leaving 60 per cent for green and open spaces including forest reserves. Ecosystem-based adaptation means it is designed to withstand natural calamities like typhoons, floods and earthquakes. Air pollution and traffic congestion are minimised by banning vehicles in many areas and by offering walkways and bicycle lanes instead.

Sharing the area is the former US military base in Pampanga that is now Clark Freeport Zone Complex, the primary district Clark Global City, and Clark International Airport.

Clark is “envisioned to be the country’s next smart and sustainable metropolis. It aims to become an international hub for companies and industries, and a major growth centre outside metro Manila,” said Vince Dizon, president and COO of the Bases Conversion and Development Authority (BCDA), which has the mandate to develop Clark in tandem with the private sector.

NCC houses the National Government Administrative Center, an integrated national government hub that will function as a recovery and backup operations centre in times of disasters and emergencies, according to Dizon.

Driving investments and growth in Clark are the airport’s major expansion and other key infrastructure projects such as the Subic-Clark Railway and the Malolos-Clark Railway that will drastically reduce travel time between Subic and Manila, Dizon added.

Bi Yong Chungunco, CEO of the Luzon International Premier Airport Development Corp., operator of Clark International Airport, said: “We have a growing catchment area in Central and Northern Luzon, due to the rapid rise of Clark as a preferred hub for business, economic and leisure activities.

“With Clark’s strategic location at the crossroad of major expressways, as well as the soon-to-complete Manila-Clark Railway Project which will have a train station stopping in front of the airport terminal, the airport will be easily accessible and well-positioned to serve travellers and metro Manila residents.”

The world-class sports complex in NCC, composed of the Athletics Stadium, Aquatics Centre and Athletes’ Village, have put the new metropolis on the map for major sporting events such as the 30th Southeast Asian Games in 2019 and the recent Fiba Asia Cup Qualifiers.

Clark and Subic have also been added to tourism circuits that once included only Pampanga and Bulacan for food mapping, farm tourism and adventure thrills.

Tourism players have welcomed the new infrastructure taking shape at Clark as “this equates to more options that we can offer our clients,” said Ritchie Tuano, general manager of Asiareps Travel Services and immediate past president of the Philippine Travel Agencies Association.

He added that these developments are also “catalysts in regaining the travel business back to 2019 (levels)”.

Bohol
Conservation, preservation and sustainability have always been integral to Bohol’s tourism development.

Permanent structures are not allowed on the 1,776 Chocolate Hills that drop over the protected area of six municipalities. When an earthquake flattened most of the province’s historic churches back in 2013, experts painstakingly restored these fragile edifices rather than build replicas.

In the gradual and systematic re-opening of tourism, Bohol is leveraging its unique attractions such as the Chocolate Hills, endangered species of tarsier, and Loboc River, while honing undiscovered destinations beyond Panglao and neighbouring Dauis. Further, efforts are underway to spice up little-known attractions and activities centered on community life, arts and crafts, culture and heritage, and ecotourism.

Bohol governor Arthur Yap shared that they are working on “high value, low density” tourism, which marks a move away from mass tourism, for both the travellers’ safety and the destination’s sustainability.

Yap said in the ongoing diversification of their tourism products, the missing piece is agri-tourism which is only possible if agriculture can be modernised. With agri-tourism, Bohol has “a fighting chance” to move into culinary tourism.

Lourdes Tuyor-Sultan, president, Bohol Federation of Travel and Tour Operators, said that by focusing on responsible and sustainable tourism, “we are trying as much as we can to minimise the negative impact of tourism. (While) tourism is one of the major economic drivers of Bohol, we are also conscious of the consequences (of its unbridled growth)”.

One of Bohol’s edge, Sultan said, is the close and strong interaction between the private sector and the local government unit currently helmed by Yap who is hands-on in working closely with the Department of Tourism (DoT) and its marketing arm, the Tourism Promotions Board.

As such, Bohol became one of the first Philippine destinations to establish a travel “bubble within the bubble” to spur domestic tourism and last year, hosted the country’s first international hybrid event, the Philippine Tourism Exchange.

In the gradual reopening of DoT-accredited tourism establishments, they are required to secure the Ultimate Bohol Experience seal, which proves their compliance with the requirements on carrying capacity, proper waste management, sewage treatment, use of renewable energy, and other sustainability measures.