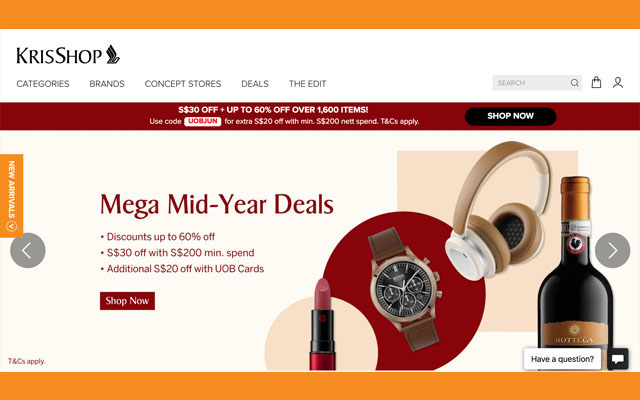 In a bid to rejuvenate inflight retail, Singapore Airlines’ (SIA) online shopping platform KrisShop has an upcoming initiative designed to allow passengers a seamless e-commerce experience through the integration of KrisShop into the airline’s inflight entertainment system KrisWorld.

A collaboration between SIA, AirFree/Thales and Panasonic, the offering also provides an express fulfilment service, whereby pre-order lead-time to flight down is shortened to a mere 60 minutes. Chris Pok, CEO of KrisShop, explained: “The initiative entails an industry-first air-to-ground connectivity technology, which will allow KrisShop to achieve real-time updates of stock availability, and enable passengers to shop inflight and have their purchases delivered directly to their next flight or straight to their homes.”

Covid-19 may have upended the travel industry and greatly affected KrisShop as inflight sales contributed significantly to its overall revenue, but it deftly turned challenge into opportunity through its omnichannel strategy by strengthening its flagship e-commerce store, KrisShop.com, to capitalise on the pandemic-induced e-shopping boom.

KrisShop expanded the assortment of brands and products available on its site, fast-tracked the onboarding of new partners, reduced local delivery times to as early as the same day upon check-out, as well as gave consumers the option of redeeming miles earned through their purchases.

Throughout the year, it also launched a number of campaigns and promotions for both local and international shoppers as many remained landbound.

The move paid off handsomely with one of the best campaigns during the pandemic period, Anniversary Fiesta, performing twice as good as other campaigns in the same quarter. KrisShop also more than doubled its sales compared to the year before.

Pok added: “Beyond e-commerce, we’re also developing new ways of working with existing inflight partners. We understand that the future of inflight retail will need to exemplify new customer engagement approaches based on the current climate, and making a comeback will require all parties involved to exercise their core strengths to collectively deliver experiences like never before.”