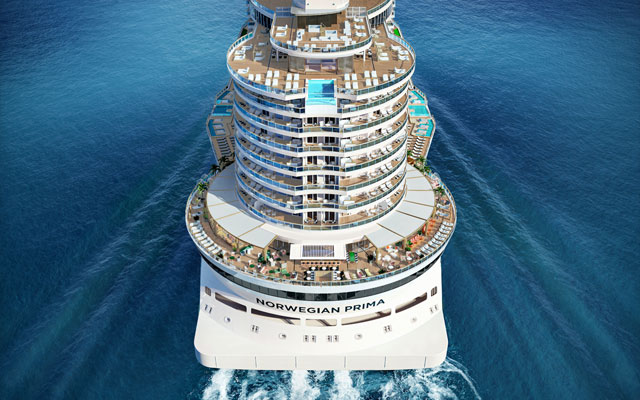 Enquiries and bookings from Asian markets have swept quickly onto shore for Norwegian Prima, the first of six ships under Norwegian Cruise Line’s (NCL) new Prima Class, mere days after its debut in 2022 was leaked early this week.

Described as a “game-changer for NCL”, Norwegian Prima is a premium cruise product that promises outstanding itineraries in the Caribbean, Bermuda and Northern Europe, 36 per cent more wide-open spaces than on the massive Breakaway Class ships, thoughtful design that brings guests closer to nature as well as their surroundings, and a variety of new experiences supported by a high staff-to-guest ratio of 1:3.

High-end cruisers are offered The Haven by Norwegian, an exclusive and centralised suite complex that spans eight decks. Other accommodation options are built to stand out too – Norwegian Prima boasts the largest suites at sea as well as largest-ever staterooms among new cruise ships.

To allow guests to connect with the outdoors and the sea, Norwegian Prima pioneers the Ocean Boulevard concept, which wraps around deck eight and provides wide-open, innovative waterfront facilities for guests to explore, such as The Concourse sculptured gardens; the Infinity Beach with two infinity pools that are set close to the water line; and two Oceanwalk glass bridges that impart the feeling of walking over water. In addition, three dining venues on the Ocean Boulevard will offer indoor and outdoor seating.

Yet another new concept to launch on Norwegian Prima is the upscale open-air marketplace, named Indulge Food Hall. Eleven venues come together to deliver favourite cuisine from all over the world, such as Southern American comfort food and barbecue from Q Texas Smokehouse; Spanish-inspired street food from Tapas Food Truck; and Indian dishes and vegetarian food options from Tamara.

“There is incredible pent-up travel demand across Asia, and we know that cruise fans are looking for new products to experience when travel is possible again. In fact, Norwegian Prima is the cruise product that many Asian cruise fans are waiting for – a contemporary, premium product that answers the desire for social distancing; luxurious accommodation in staterooms and suites that are comparable to some of the best city hotels in the region; plenty of Instagrammable locations across the ship; and a superb F&B collection that answers a range of dining desires, from casual to fine-dining needs,” Lim elaborated.

“We are also very proud that we are able to bring a new product to market in such challenging times. It demonstrates our confidence in the brand and in travel and tourism recovery,” he added.

Lim revealed that a booking from South-east Asia has been secured “and more are on the way”. Intense enquiries have also come in from China, Hong Kong and Japan.

“While our travel agent partners are unable to experience Norwegian Prima now on a fam trip (due to travel restrictions), we are not sparing any expenses to bring them up to speed with the product. We have training and product webinars lined up, and we are putting Norwegian Prima details out on social media channels to drive consumer interest,” said Lim.

When asked if any of the future Prima Class ships would be deployed first to Asia, recognised as a growing and critical market for international cruise lines, Lim said there could be an opportunity for that to happen as more Prima ships join the NCL fleet.

NCL will launch a new Prima Class vessel every year from 2022, with the last coming to market in 2027. The Prima Class fleet will expand NCL’s capacity by 47 per cent.