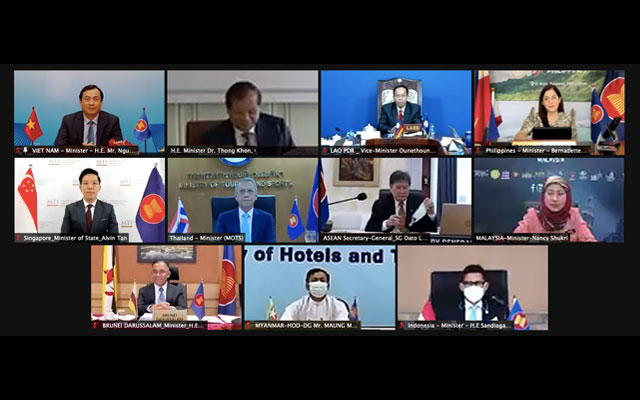 The ASEAN Tourism Association (ASEANTA) has called on South-east Asia leaders to take urgent action to reboot the travel and tourism industry in the region by Q2 this year, and save the tourism industry from collapsing under the weight of the pandemic.

During the recent 24th Meeting of the ASEAN Tourism Ministers, which took place virtually last week and was hosted by Cambodia, ASEANTA laid down a series of recommendations to the ministers, including continuing their respective governments’ support in a fair and equitable manner to ensure survival of the industry. This includes government guaranteed loan, tax reliefs, subsidies, incentives, and other relevant fiscal policies.

The association also called on the respective governments to prepare for the reopening of borders by laying down frameworks for cross-border travel, standard operating procedures (SOPs) for the whole tourism ecosystem, and guidelines on testing and vaccination by Q1 this year. That also covers the possible development of a common ASEAN health passport, with the potential integration of existing contact tracing or health declaration apps.

In addition, they urged the tourism ministers to facilitate the resumption of all types of travel – including business, leisure and VFR travel – by Q2 this year, in accordance with the ASEAN Travel Corridor Arrangement (TCA) framework.

The ASEAN TCA framework, which was issued last November by the South-east Asia leaders, aims to develop a common set of pre-departure and post-arrival health and safety measures, led by the Indonesian foreign affairs ministry. The development of ASEAN TCA would help restart cross-border travel by laying down a common set of requirements across countries.

Under the ASEAN TCA, ASEANTA proposed for business travel corridors to include the following safety measures: pre-departure and arrival testing, self-isolation for only one to two days until PCR test-on-arrival results are released, a controlled itinerary or allowance for business travellers to travel for leisure after as long as it’s sponsored by the company, and no quarantine for returning business travellers.

The association also floated the possibility of quarantine-free travel bubbles to allow leisure and VFR travel between low-risk countries, with no quarantine imposed on both incoming and returning travellers. The plan would entail the need for mutually recognised testing procedures, alongside common vaccine documentation for ease of verification.

Business travel alone will not be enough to restore intra-ASEAN traffic to healthy levels, ASEANTA said, noting that intra-ASEAN traffic is 35 per cent of the total international O&D passenger traffic in South-east Asia. It also pointed out that reciprocal green lane (RGL) arrangements have not generated significant volumes of air traffic, citing official data showing that Singapore received only around 835 inbound travellers from the South-east Asia region travelling under the RGL arrangements between June 8 to December 25 last year.

If reopening of borders is limited to essential business travel, passenger traffic between South-east Asian countries will likely remain at less than five per cent of normal levels for most of 2021, it added.