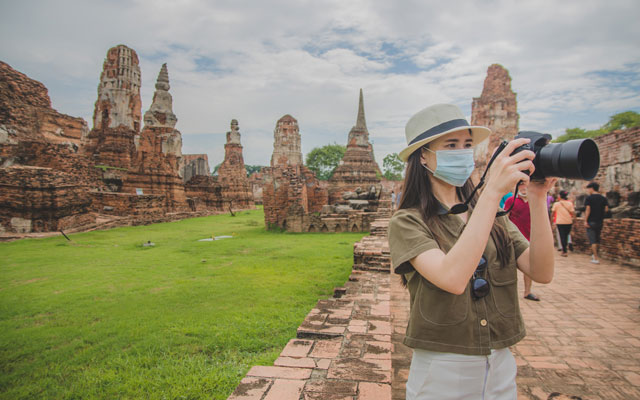 The report shows that even under a mild scenario, the Asia-Pacific region in 2023 is likely to still have around four per cent fewer arrivals compared to 2019. The medium scenario suggests that foreign visitor numbers in 2023 could be only three-quarters of the 2019 volume, while under the severe scenario, that proportion is predicted to reach less than half of the 2019 volume of international arrivals. The results are very uneven as well, not just under each scenario, but also for the major destination regions of Asia-Pacific. The Americas for example, after reaching a total of 45.36 million foreign arrivals in 2020 into the four destinations covered by this region, is unlikely to see any annual increase in IVAs until 2022. Calendar year 2021, in particular, is projected to be another difficult year for the Americas. A further annual decline in foreign arrival numbers is expected, with annual losses ranging from 3.59 million to as much as almost 23.76 million, depending upon the scenario conditions at the time.

IVAs into and across Asia, on the other hand, are expected to show an increase in 2021 over the 70.64 million received in 2020, but only under the mild scenario. From 2022 onwards, however, annual increases are forecast to gradually improve in volume under each of the three scenarios.

The only differing characteristic is the volume of the annual increase in each case. The Pacific is expected to be in a similar position as the Americas in 2021, with IVAs falling from the 5.85 million received in 2020 under each of the three scenarios. While that decrease may be relatively minor under the mild scenario, it could still represent a contraction of almost five million IVAs under the severe scenario. Calendar years 2022 and 2023, however, show some return to annual growth under each of the scenarios.

The three main visitor generating regions of Asia, the Americas and Europe are likely to remain as such, in terms of the additional volume of IVAs delivered into and across Asia-Pacific between 2020 and 2023, differing only in their respective relative strengths. Interestingly, as each scenario becomes a little more difficult and volatile, the relative proportion of IVA growth out of Asia between 2020 and 2023 becomes slightly more significant, even as the absolute numbers diminish somewhat.

However, these proportions differ significantly across the three main destination regions of Asia-Pacific. Intra-regional traveller flows from the Americas, for example, dominate arrivals into the Americas, rising in relative significance as the scenarios become increasingly difficult and volatile.

For the destination region of Asia, it is that region itself that generates the sheer bulk of the additional IVAs into the region between 2020 and 2023, with its relative share of additional arrivals rising from around 84 per cent under the mild scenario to more than 87 per cent under the severe scenario. Additional IVAs into the Pacific are likely to be sourced largely out of Asia and the Americas, with those two source regions combined expected to account for over 70 per cent of the increase in IVAs into this region between 2020 and 2023, under each of the scenarios. PATA CEO Mario Hardy pointed out: “While growth in international visitor arrivals into and across Asia-Pacific remains difficult in 2021, there are promising signs for 2022 and 2023. A return to near pre-Covid-19 levels of arrivals, while possible by 2023, appears now to be feasible, at least if conditions as they are now, abate quickly and permanently. Much, however, will depend on events during this present northern winter and the arrival and management of the more traditional flu season.

“Given the speed with which conditions can change, the PATA forecast report this year does not have the same destination-specific detail as previously published in the past, but rather focuses on regions and sub-regions. They are, however, more flexible as they will be updated twice over the coming 12 months to factor in developments as and when they occur.”

Hardy concluded: “Domestic travel will, in many cases, fill some of the void left by the loss of foreign arrivals, and as much care and attention to those travellers needs to be given as to those from overseas. Furthermore, for both types of visitor, perhaps the future will depend more on length of stay and visitor satisfaction, than on a generic and simple headcount of arrivals. Metrics that track such indicators will possibly become a new standard for determining tourism potential and performance in what is likely to continue being a volatile world.”

The Executive Summary is available here.